In my opening post, I mentioned that I gave a talk at last year's TEDMED meeting.  Giving the talk itself was a great experience, but more important to me were (are) the relationships that I made.  It was such a strange and lovely collection of people - lots of square pegs - that I felt right at home in a way I rarely have before.  I mentioned meeting Jonathan Eisen in my first post, but this time, I am going to focus on an initiative that the two other 'young guys' and I started.

The average speaker at TEDMED is, I would say, at least mid-career and crushing it.  Last year, there were three of us who did not fit this mold.  Me, you know, a PGY-3/PhD-2, sort of in medias res.  The other two, Ali Ansary (who talked about embracing technology in health care)

were rising 3rd year medical students.  To be fair, they both have other advanced degrees and have done some 'crushing it' on their own, but I digress.

The three of us talked (on stage) about quite different topics, but our conversations backstage and during the breaks always gravitated to what we knew best - medical education.  We all felt that our experiences were really good, but that medicine was changing really fast, and the educational system wasn't keeping up.  We were lucky enough to engage folks from the AAMC and talk about changes they had planned already to the MCAT to try to capture a bit more about a student than just their hard science acumen, but we felt that we wanted to contribute a bit more to the discussion.

A series of discussions over Skype ensued and we came up with a sort of manifesto, which we published on the Huffington Post

and subsequently on The Health Care Blog.

These articles, in short, outline what we see is a set of problems facing medical schools and physicians preparing to practice in the 21st century.  What we don't think we have right now is answers and there are already nearly 30 medical schools pioneering new curriculums (all different!) and organizations from the AMA (10M$ grant!) and AHA (white paper) who have taken stands to stir up change.  So how the heck will we fit in?

What we hope to do is start a conversation that anyone can join in on about preparing the 21st century physician.  We started a website, www.tomorrowsdoctor.org

which solicits people's 'visions' of how to prepare the 21st century physician.  The TEDMED blog ran a post about this at the time, and it is currently only cataloguing visions, but it will (next iteration, a week or two we hope) have more functionality to include the ability to comment on individual visions and share them via social media.

We are going to then sit down in 6 months time with some collaborators and curate these visions and the conversations that they begin and use this 'crowd-sourced' vision to design a unified set of core competencies for the 21st century physician and the track required to prepare and admit them.

Will it be taken seriously?  I don't know.  The AAMC is interested in what we're doing, so that is a start.  And, anything that sparks a conversation about this important issue isn't a waste of time. So - go share your vision with us if you haven't already...

We have a meeting with the AAMC next week, if there's anything you'd like us to communicate with them, let me know in the comments. Otherwise, stay tuned.

Upcoming posts will include a conversation about stochastic models in biology, a real 'cancer connection' where I've helped a modern artist (www.raypaulart.com - @raypaul4) and a pathologist come together to make art and start a healing journey (see twitter feed for an example of the new art!) and my own, personal, EO Wilson rant... 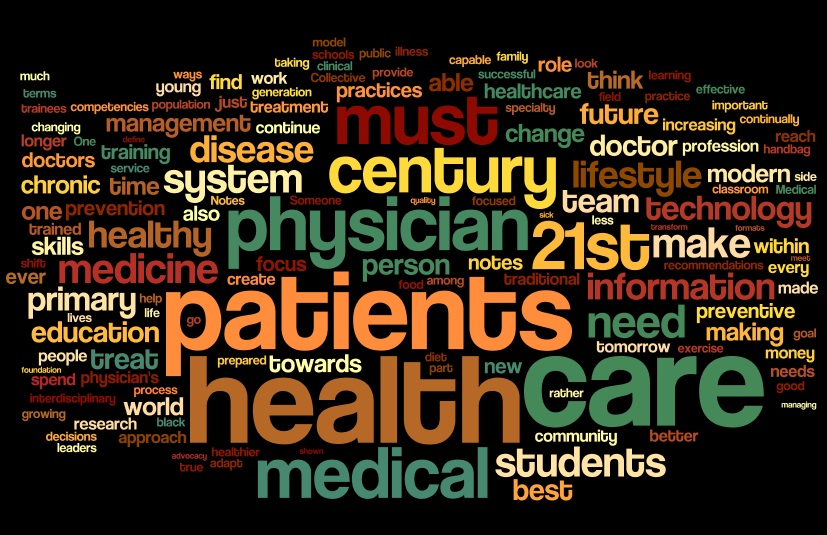