Barriers to use of preprint servers

A week or two ago, I wrote a guest post on my friend +Jonathan Eisen's blog where I outlined what I thought were some problems standing in the way of folks utilizing #openaccess #preprint servers.  I argued the micro-community building, like we're trying to do at Warburg's Lens, or that the folks at Haldane's Sieve have been doing, was a way forward.  In that same post, I put a small survey, from which I learned quite a bit, and I want to share those results with you here.

I've never used google speadsheets before, so I learned some lessons about coding answers (doesn't deal well with age ranges etc.) and I had to do a BIT of recoding.  There are lots of ways to look at the data, but I picked two to break out specifically.  First some summary statistics though: 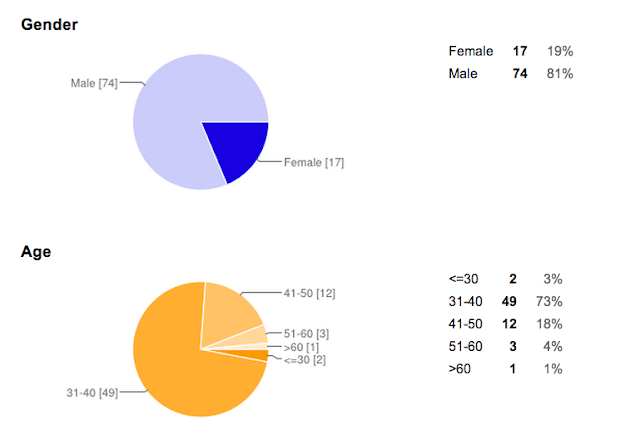 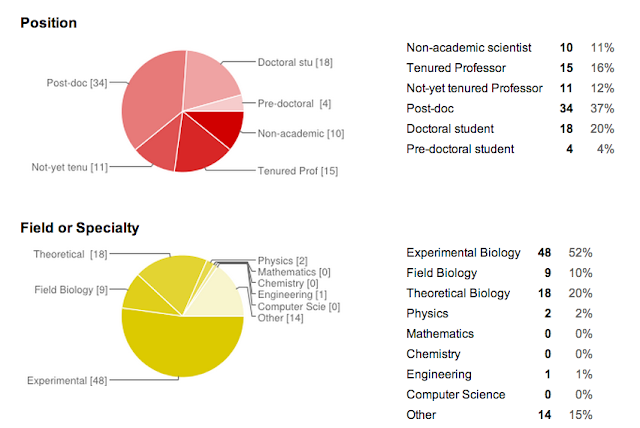 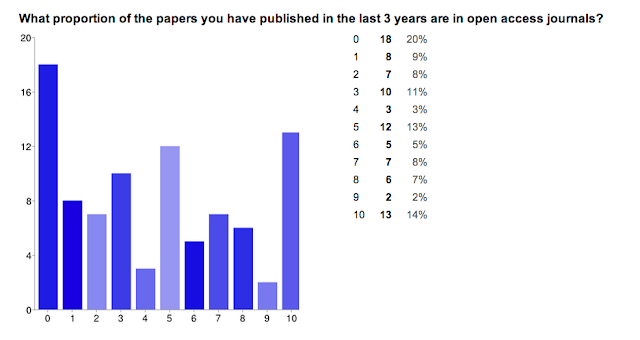 And...  the reason we did the whole survey.  WHY people don't utilize preprint servers.

I was really surprised by this one.  I thought that the 'afraid of being scooped' answer would win the day (this is the case from my anecdotal experience with asking colleagues).  I have a good answer to this one, to try to allay fears... but we don't even need it!  The number one reason was:

And this is easy to change, it is just a culture shift, and one that is, I think in flux (in the right direction!).

You can see all the responses here, if you want, which includes all of the free text responses - where I think the real fodder for change lies.  These are hard (impossible) to display, except to copy and paste them all in.  But, I can tell you, having read them all, they fall into several categories:

- There is no benefit to me, so why spend the time
*** There is huge benefit, especially to early career folks, as you can show off your work to anyone, with just a link.  Further, with the growing popularity of pre-print discussion forums, you can get valuable feedback before submission, hopefully making the process smoother.

- I want to, but my supervisor/collaborator won't let me.
*** Point those folks to these blog posts!  Start the discussion.

- I'd do it if tenure committees/funding agencies would give me credit.
*** This is a big issue, and I can only hope that the work we do here helps makes that change a reality.

- I'd do it if people could cite my preprints
***  THEY CAN!!!  And, google scholar picks up those citations and counts them.  Oh, brave new world, with such alt-metrics in it.

- I don't know the rules of the journals that I want to submit to, and I don't want to jeopardize my chances at "real" publication.
*** Just ask Wikipedia - here's the answer

-  There's too many choices!

Anyways, please do take a moment to read the responses, they are enlightening. I, for one, have learned that the barriers to getting pre-prints servers more utilized is simply one of outreach - so here I go.  If you are in favor of speeding up (and opening up) science, take a minute to engage a scientist in your lab on this issue.  It will pay dividends.  There are plenty of options for preprint servers now, nicely outlined by +Jonathan Eisen in a post he wrote here, and even more coming on line.  I am particularly excited about the bioRxiv coming out of Cold Springs Harbor, and am one of their affiliates in getting going.  Until then, I have personally used the physics arXiv for my last five papers as well as a test use of PeerJ which has nice alt-metrics.

Ah, the paradox of choice.

Whatever you choose, post your preprints before you submit.  Share your science.  Whatever you study, let everyone else see stand on your shoulders so they can see farther, and further the cause.
Posted by Jacob Scott at 8:48 PM