Investigating the effects of microenvironmental perturbation on a stem driven tumor

I've been interested in the cancer stem cell hypothesis for some time, a subject that my colleague +Heiko Enderling has been thinking about and modeling for some time (list of his pubs here). I first became interested in this concept before I became a DPhil student and member of the Integrated Mathematical Oncology group, when I was a clinical resident in radiation oncology at the Moffitt Cancer Center.  One of the first papers that I saw that truly scared me was a paper by Tamura and colleagues (abstract) that showed that recurrent glioblastomas had a significant increase in CD-133 staining (a stain commonly associated with stemness in this cancer and others), and that this increase is correlated with (maybe causes, jury yet out) an increase in aggressiveness of the recurrent tumor and a decrease in its sensitivity to treatment. 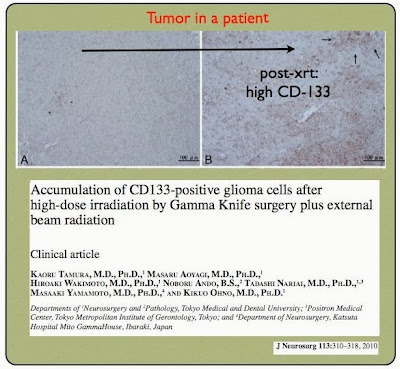 The standard rationale for the latter is that these special 'stem cells' have a higher intrinsic resistance to radiation therapy (which I don't argue), but I subsequently wrote down a series of simple (some might say Noddy) ODE models which suggested, at least to me, that there might also be a stem promoting effect of radiation.  Since then, I have found that this effect has been shown in breast cancer, and further, that there have been a number of microenvironmental perturbations that have been shown to do the same thing, though only in a qualitative way - many of these articles have had my collaborator, +Anita Hjelmeland as a co-author, and I talked about them quite a bit in a previous blog post on our recent R-01 submission.

When I first started on this problem from the theoretical standpoint, it was with ODE models, as I mentioned.  But since then, +David Basanta and +Alexander Anderson and I have worked to build a cellular automaton model of a stem-driven tumor which included blood vessels as sources of oxygen. We built this simple model to test if there were some sort of intrinsic/emergent change in the resultant tissue phenotype when the overall levels of oxygen supplied to it went down (when we reduced the density of the vessels).  Below you can see the schematic of our model system.  On the left is the canonical Cancer Stem Cell hypothesis (which I have major issues with...  more to come in a few weeks I hope) and on the right there is our CA model rules. 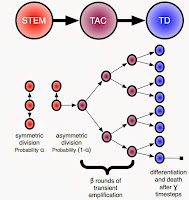 After much simulation and effort we found... in short, that no, there is not. Our initial, negative results, were frustrating, but after discussions with +Anita Hjelmeland and Prakash Chinnaiyan (a biologist and clinician, respectively) we found that the model was telling us more...  while we found little qualitative effect when we changed the vascular density, changing the instrinsic stem behavior parameters in the presence of a minimalistic environment revealed that there were only three major meta-phentypic behaviors possible: extinction, dormancy (homeostasis) and overgrowth as seen below. 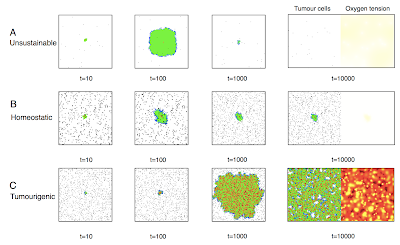 Our frustration at not seeing the emergence of greater stem-fraction upon lowering the oxygen levels however, led to the rather obvious (in retrospect) conclusion that only through a modification of the symmetric division rate of the stem cells (modified by hypoxia) could this effect be recapitulated. Interestingly, this is a conclusion we had come to in the past using a simpler model system (ODEs) but it was never convincing (though there is a nice piece in J Theoretical Biology which gave me some confidence... here).  Initial testing of this hypothesis, by modification of the CA rules to include this change are striking - surrounding the area of hypoxia, we have an emergent stem cell niche.

We have just begun exploring this phenomenon, and indeed there is quite a bit of work to do, both theoretically and experimentally, to validate and better characterize what is going on - so that's why we wrote an R-01.

Anyways, if you want more details, you can read the paper on the bioRxiv now, or in a few days on PLoS Computational Biology where it has been accepted and is nearing publication.  We've also made the baseline code freely available on sourceforge here.

If you have comments on the paper itself, please leave them on the bioRxiv site so anyone can see them (or wait to put them on the PLoS CB site). Ok, back to work.