Earlier this week in our morning didactics session we had an interesting discussion about advanced stage non-small cell lung cancer (NSCLC). Now, there is certainly a LOT to discuss about advanced stage NSCLC, and there is a lot of uncertainty in how to treat it with the multitude of new targetted agents coming on the market for mutations like ALK, KRAS, N-RAS, BRAF, EGFR, etc...  and the trials that have been run are often difficult to interpret because of changes in standard of care, stage migration due to novel imaging modalities (PET) and other things.

To add to all the uncertainty in treatment, the staging guidelines (AJCC in this case) can change. When I started my residency in 2009, we were on the 6th edition, and now it's the 7th. While the changes are usually small, they matter, because the trials that are now having results reported were often stratified using earlier editions of the staging guidelines, once again clouding the picture for patients needing treatment decisions today.

One thing that hasn't changed, and never will (?) however, is the location of nodal stations. Right? Maybe not! As a refresher, we care about a number of nodal stations when staging lung cancer. Here is the picture we all know and love (also available from the AJCC in poster form here): 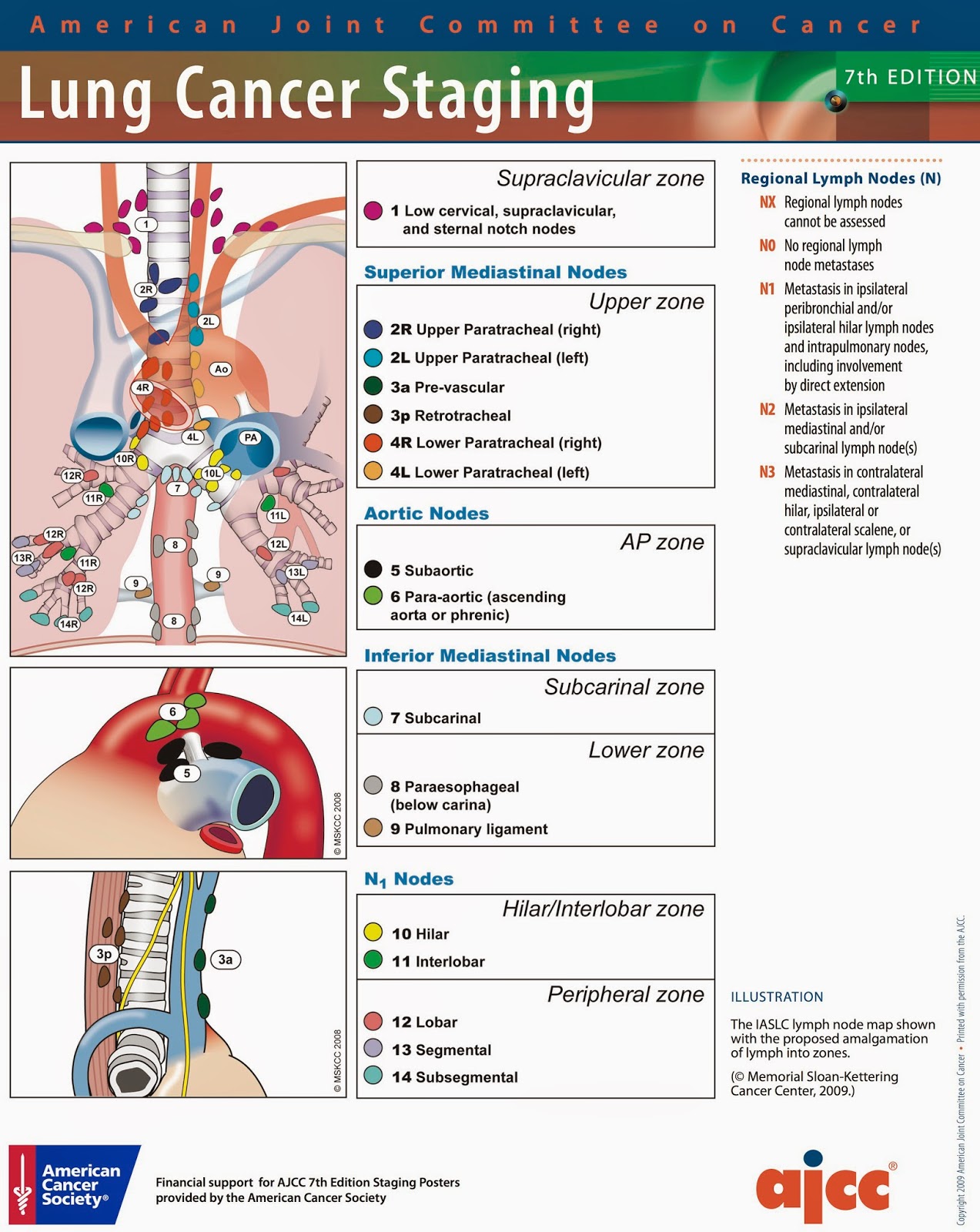 Please direct your attention to the lymph node station labelled #7 - this is the sub-carinal station, and one that is often involved, and often biopsied because of the relative ease of access (bronchoscopically). Notice it is, by definition N2. However, it is also considered mediastinal.

Now, this is all well and good, until you have a patient present, as we did at our cancer center several weeks ago with a Left sided T2 NSCLC with station 7 involved TO THE RIGHT OF MIDLINE. We went through the imaging carefully, it was NOT station 8R, it was station 7, creeping down and crossing midline to the RIGHT.

So, now the patient has, by one definition, T2N2 disease (there were no other contralateral nodes or other nodes to make him N3) by virtue of his involvement of station 7. HOWEVER, he could also have T2N3 disease by virtue of having contralateral mediastinal involvement! This is not a trivial difference as it is the difference between IIIA and IIIB, resectable and unresectable.

What to do? Well, he had poor performance status, so surgery was out either way, so we opted or combined, definitive chemo-radiation. However, this uncertainly raise the possibility of a need for more detail in the staging system. Sort of in jest, we proposed a change for the 8th edition - maybe we should have a station 7.5R/L dichotomy for significant involvement, or possibly a 7C/R/L trichotomy?

Email ThisBlogThis!Share to TwitterShare to FacebookShare to Pinterest
Labels: Clinical