I see flowers & I think of metastasis: or how theoretical oncology has reshaped all of my thinking

I try to reserve weekends (or at least the hours of 8am to 8pm on the weekends) for time with my kids. I've got a little boy named Rhys, who is just now starting to learn language (he's about 18 months ago, really fun age) and a precocious little girl named Maren who is five and a half. I grew up either in a house full of books or out in the woods - my mom is a librarian and gardener and my dad is an English teacher, novelist and outdoorsman. Given this background, it is no wonder I still pay double most of my friend when I move because of the sheer weight of books my wife and I carry around, and also that I continue to love being outside.

My kids however, have a mom who was an occupational therapist and is now a photographer (gorgeous pics of our kids and other stuff on her page) and a dad who is a theoretical oncologist. So it shouldn't be surprising that my daughter doesn't mind a little gore, indeed she likes watching necropsies (thanks #thebrainscoop)

a Tweet which actually ended up in an article about Dana Scully from the #xfiles, Emilie Graslie from #thebrainscoop and the girl from the #BigBangTheory which you can read here:

and that we spend more time looking at Netter's anatomy book than almost anything else.  A few weeks ago, we busted out my microscope from medical school and I ordered a cool set of slides of amphibian and fish anatomy. She spent a few hours just fascinated and has subsequently asked to look at a ton of stuff under the scope (blue jay feathers are really fun - try it with the light from below, and then turn off the light and shine a light from above... great lesson on refraction). 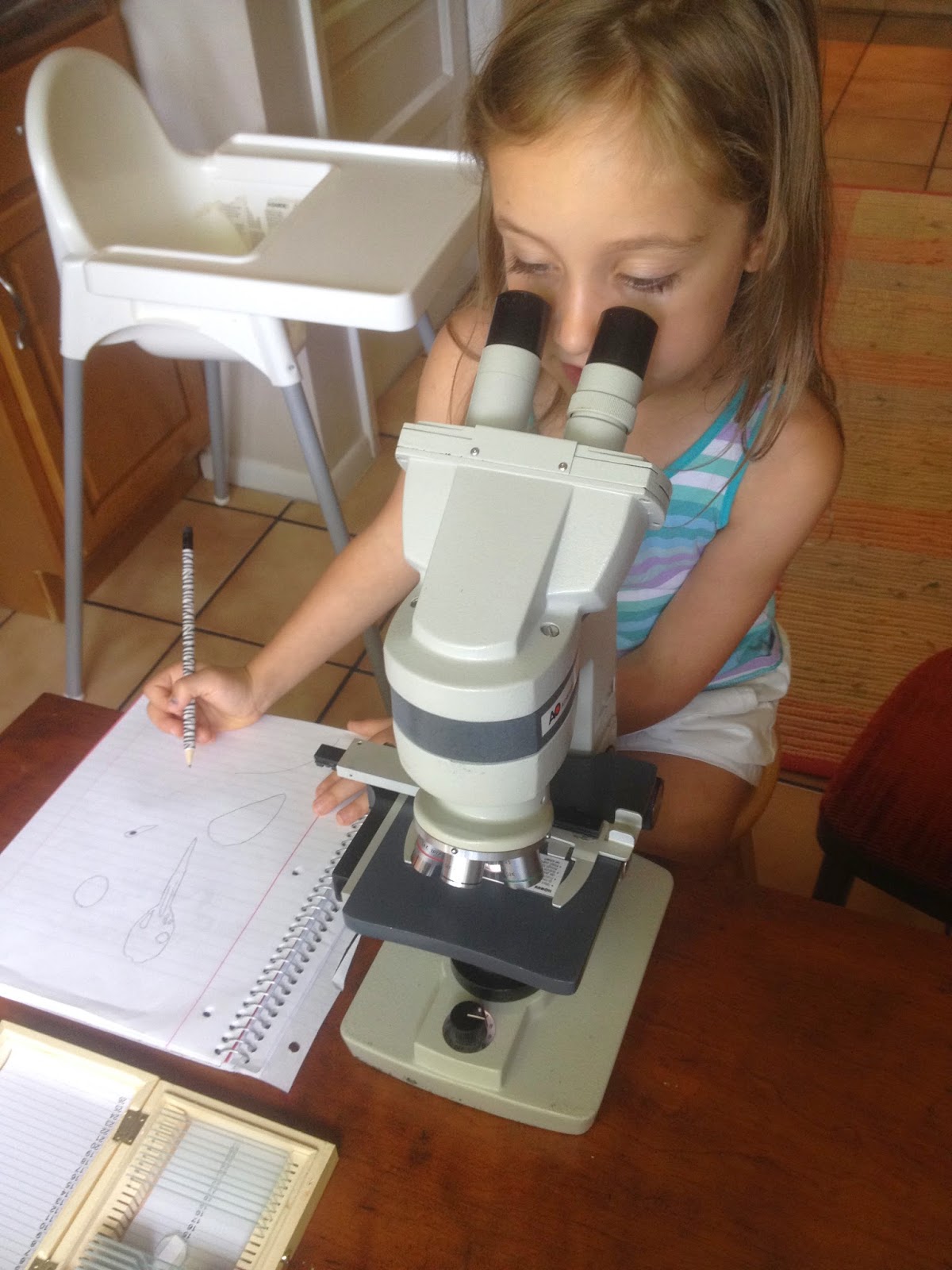 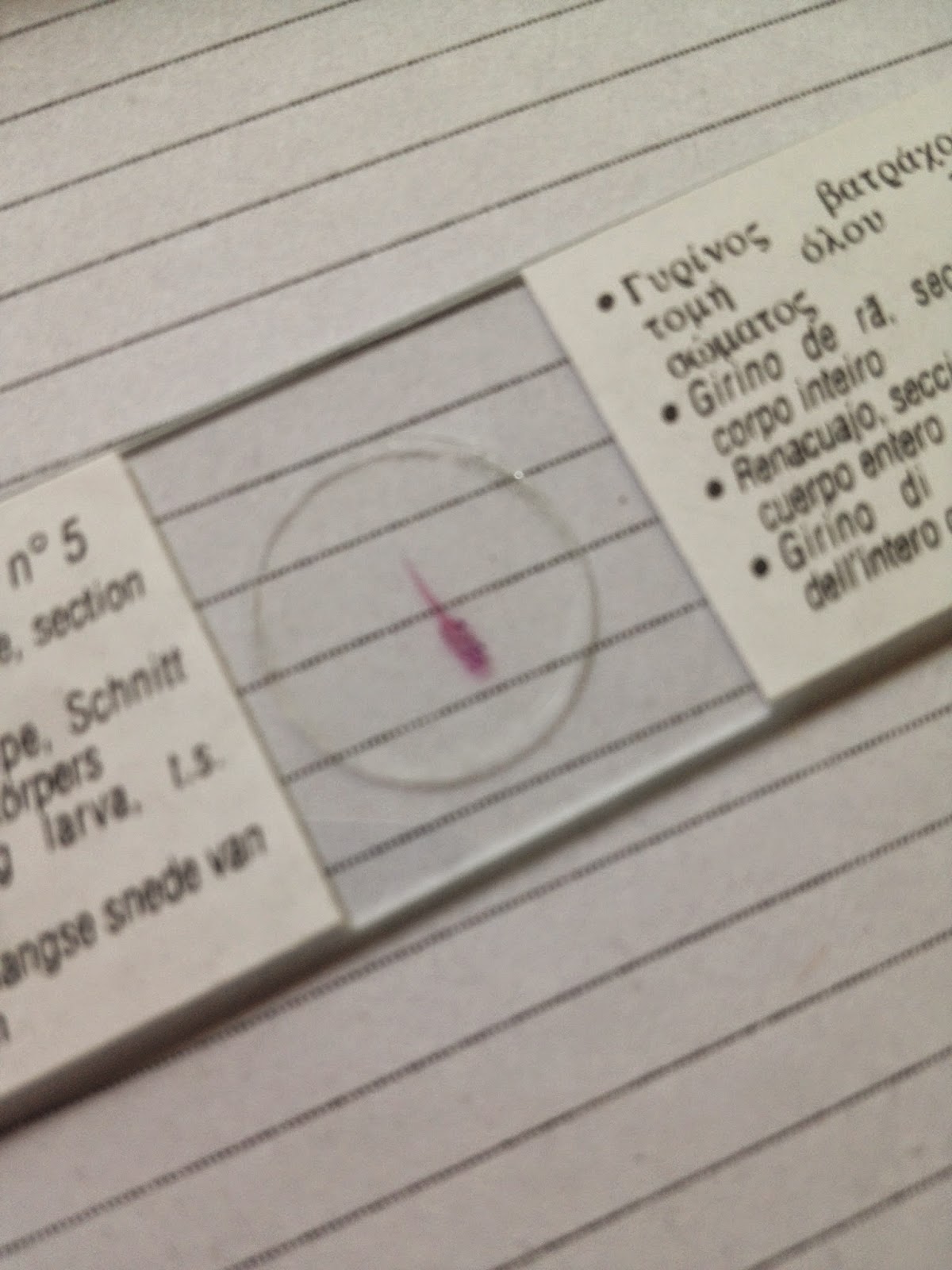 That's her doing her best Ramon y Cajal impression on the left, and a tadpole stained (with H&E?) on the right. So, anyways, last weekend, we were trying to figure out what to do while her brother took a nap, and decided to see what we could see in the tanks of some of the bromeliads at the end of our street. We had watched a great David Attenborough documentary (oh yeah, they're pen pals)

in which we learned that lots of micro-animals can live in bromeliad tanks.

Neither of us could have been happier, however, than when we saw this little beauty under the scope (or, I should say \mathcal{O}(100) of them) 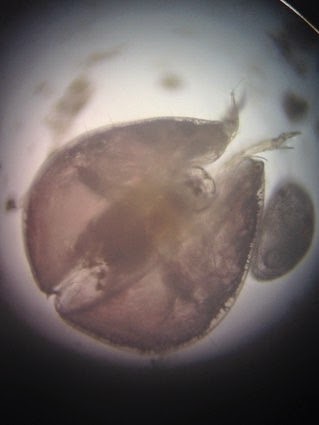 I turned immediate to twitter to ask my friends what it was, and was immediately told it was an #ostracod, most likely Elpidia bromeliarium. I dug a little more into it and there is actually only one species of these described in Florida, and many new species are found all the time (most recently in the Honduran cloud forest - http://zookeys.pensoft.net/articles.php?id=3305 just last year!). So, needless to say we are pretty excited about the possibility of having found a new species. 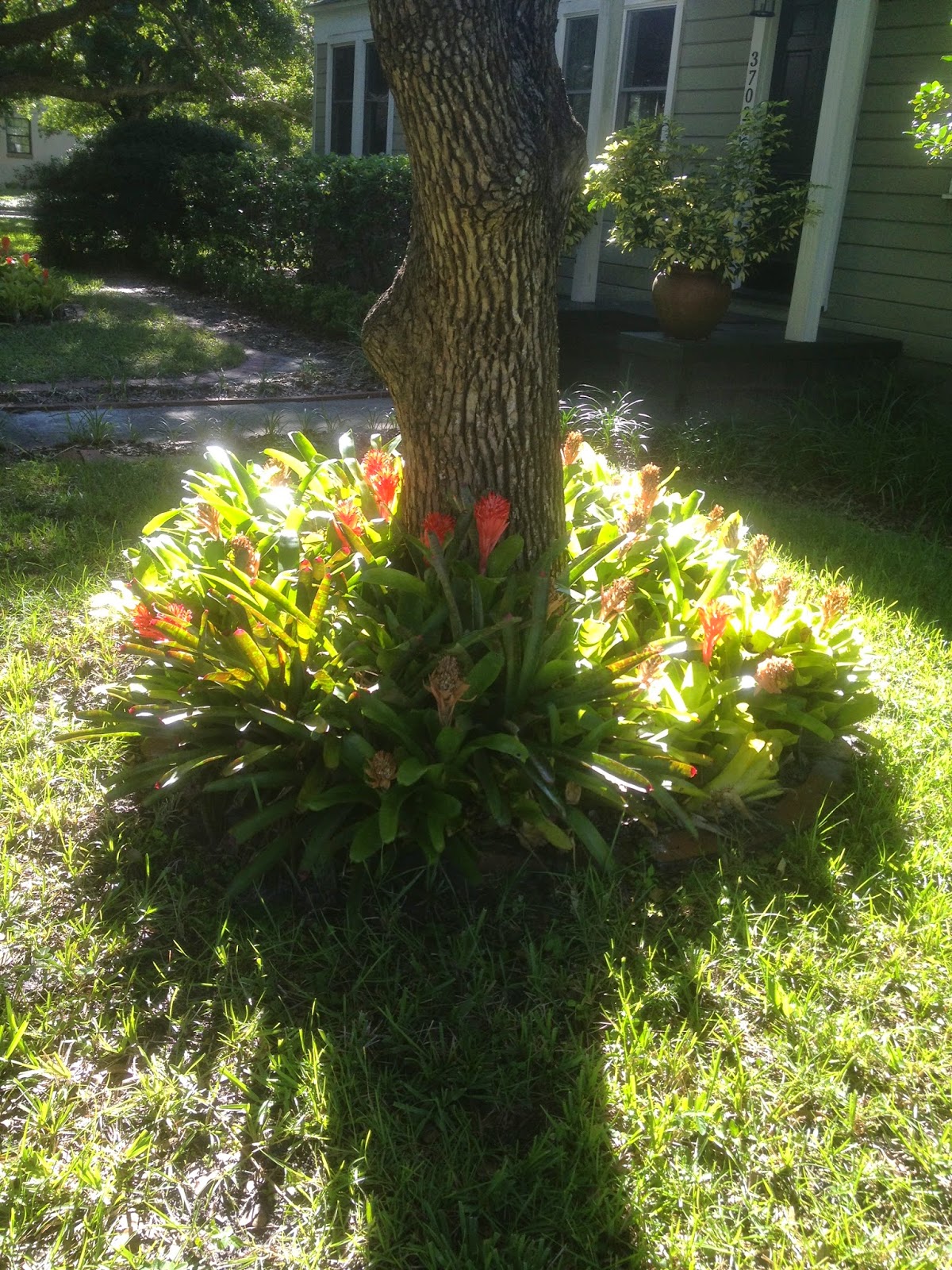 What really got me going though, was the question of how these things get around?! There is only the one stand of bromeliads in my whole neighbourhood, and these little crustaceans can't move purposefully outside of even the tank they start in! Here is an early description of them I found from a journal in the 50s: http://journal.bsi.org/V06/4/


Then, on the same day, someone tweeted about a new computational study of 'jump dispersal' vs. 'rafting' a mechanisms for animals/plants to move over large distances (from island to island, say) and I started thinking about the problem of metastatic disease. When animals or plants 'raft' from one place to another (this is often called Oceanic dispersal as well), they are often swept from river banks with a hunk of vegetation or soil, and often more than one animal (especially for sexually reproducing creatures this is very important). I remember a PNAS paper in which the researchers (using a totally medieval experimental technique where they sewed two mice together - seriously) found that many successful metastases brought their own soil with them (in this case non-cancerous cells to support the metastatic seeds).

There is more and more literature these days suggesting that it is clumps of circulating tumour cells that cause metastasis, not single cells (also a nice paper from my friend and collaborator, Peter Kuhn - lab page here). These clumps seem analogous to me to the rafts that other species might use, and could even be formed in the same way - in tumour associated mosaic vessels - there could certainly be a 'sweeping off' of a large clump of cells. If one disturbs the smoothness of a healthy vessel wall, there will be a disturbance in the otherwise (pretty close to) laminar flow and eddys will form and severely change the stress profile in the flowing fluid, creating a situation in which a chunk of cells could easily break free.

If true, this *sort of* obviates some of the modelling efforts that +Philip Gerlee and I (and others) have done considering the fate of single cells, but that work could certainly be reparameterised to consider the shedding rate of these clumps. My hypothesis would be that the results are quite similar, as the shedding rate would go down, but the chance of colonisation (given a clump landing somewhere) would be much higher.

Some other issues, like the Allee effect, could be overcome by this. Further, it offers some different ideas about therapeutics/preventatives. I wonder, for example, if there is any data on (non-liver) metastases in patients with Greenfield filters with colorectal cancer?

As for the little Elpidia - I found a cool study that shows, as +Benjamin Werner suggested, that they can survive in the guts of a number of creatures, so that's probably how they get around...