A big move and a new research group. Join us!

My decision to leave the IMO and Moffitt Radiation Oncology was one of the hardest professional (and personal) choices I've ever made. I've made friends I won't ever be able to replace, and learned lessons I'll never forget. However, for many reasons, including family and professional and personal growth, it is time for me to move on. I'm very lucky to have found a post in my home town at the Cleveland Clinic doing exactly what I want to do. They have hired me be a physician-scientist, to start a research group in the department of Translational Hematology and Oncology Research (yes, they call it THOR - how awesome) studying the evolution of resistance, and to continue my work as a sarcoma radiation oncologist.

I'm lucky to be joined by two brave souls who will begin their DPhils under my co-supervision between Oxford and my lab at the Cleveland Clinic. +Artem Kaznatcheev , a theoretical computer scientists and mathematician (who is also a prolific academic blogger - see his blog TheEgg here) will begin in the department of Computer Science this Michelmas with Peter Jeavons, David Basanta and myself supervising. Artem's thesis project will focus on the evolutionary process, but beyond that we're not sure - we'll find something that piques all of our interests I'm sure. Artem's work with David and I to date has included attempts to bring spatial structure into evolutionary game theory using the Ohtsuki-Nowak transformation. We found, broadly, that game dynamics can change significantly based on local neighborhood size. This finding has, I think, broad implications for understanding spatially heterogeneous tumors using game theoretic methods. 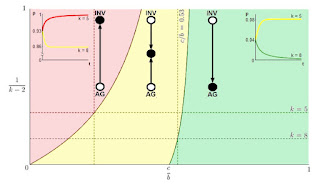 and more recently using time lapse microscopy to quantify competition dynamics in vitro - something I'm presenting a poster on at ECMTB2016 later this week.

There are more ideas than time, in general, when working with Artem, so I'm quite keen to begin this new journey and strengthen the connection between computer science that we began with +Dan Nichol doing his DPhil with Pete Jeavons and +Alexander Anderson - which we kicked off with Dan's evolutionary steering paper.

I'm also very luck to have +Andrew Dhawan joining, who will begin his DPhil in Oncology with Francesca Buffa and Adrian Harris. Andrew's DPhil will be slightly more prescribed, it being under a CRUK studentship. He will be focussing on building a comprehensive map of the transcriptional response to hypoxia in (breast) cancer. Many of you will note that this is reasonably far from my expertise, but I think it will be a great opportunity for me to hone my Next Gen Sequencing chops, and also to inject some theoretical thinking into Oxford Oncology.

Andrew has spent this summer, since he finished medical school in Ontario, Canada at Queen's University School of Medicine, working with me and +Andriy Marusyk on collateral sensitivity in non-small cell lung cancer. He is attending a summer school (sponsore by the Cancer Research UK coincidentally) on ecology and evolution in cancer - annoying scheduled the same week as ECMTB. He'll be presenting the following poster there:


On another random note: it turns out, unbeknownst to any of us, Andrew and Artem did their undergrad at the same institution, in the same department! They both went to the 'MIT of Canada' in Waterloo. Small world.

Anyways, I am immensely looking forward to this move - the next few weeks will see me at ECMTB, then home to Tampa for one day, and then the move Cleveland, where I start August 1st. I am also looking for someone interested in joining the team as a post-doc who wants to work with us to make a difference in patient's lives through the study of evolution in cancer (or bacteria) with primarily mathematical methods.

If you're coming to ECMTB, look me up! 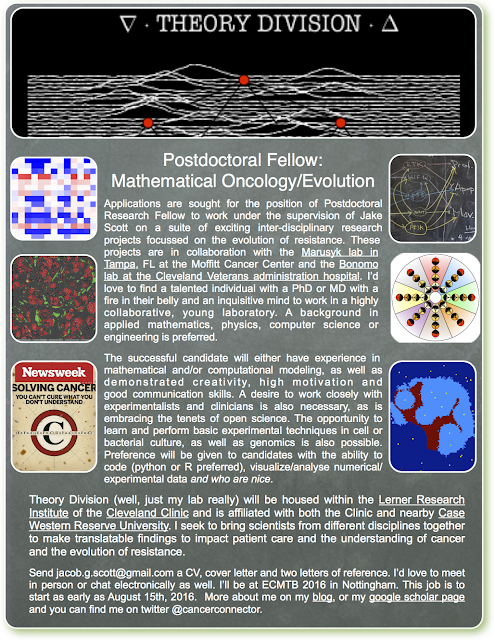