This is the story of a Cancer Connection I never hoped to make and also the one that has brought me the most joy.


About a month before my family and I left for Oxford, my dear friend and neighbour Ray came over and asked if I'd look at this side, where a orange sized mass was growing.  I took a feel and suggested he get the thing cut out by a cancer surgeon.  Like any good neighbour, he asked if I'd do it...  which I declined (I only do RADIO surgery).  Being a self-employed artist, Ray didn't have any insurance, so he ended up convincing a friend to resect it in return for a painting.

So, you know I'm a cancer doc... so you can probably guess how this story plays out.  But before I tell you (or let Ray tell you), I want to share a bit about Ray (you can also learn more about him on his website: http://raypaulart.com).  Ray's paintings have always struck me, and my scientist and physician friends in similar ways.  There is just something alive about them.  Something cellular.  Something moving.

This makes sense as Ray studied biology as an undergrad, but it is also something that is always moving in his mind: at the heart of this artist is a scientist.  Here is the one that first grabbed my eye when we first met (and that I immediately bought for my house): Lionfish.  (Sorry for the terrible image quality, the rest will be better). 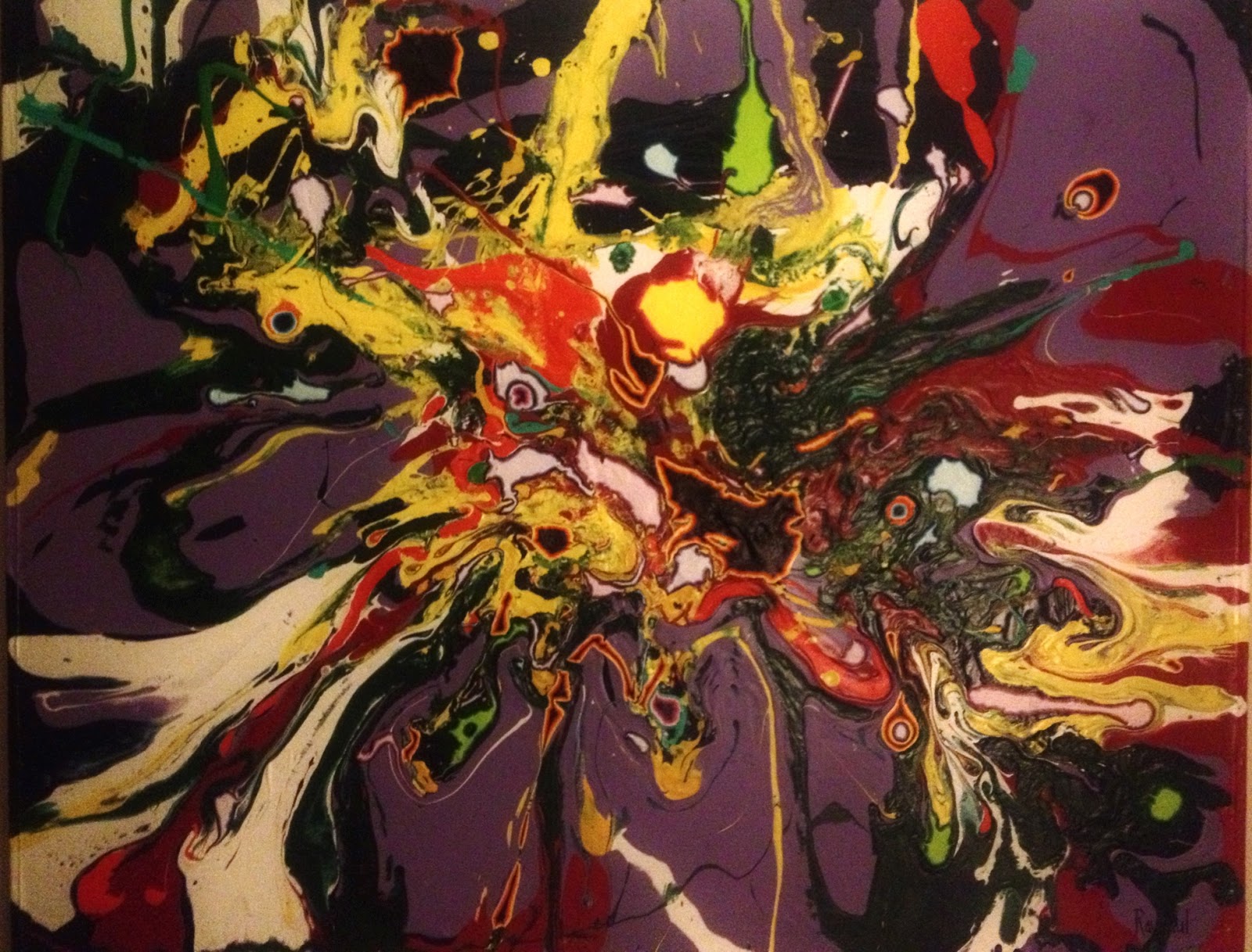 Ray and his partner Missie have also always been a touchstone for me during my training - reconnecting me to art and beauty when my world became overrun with data and facts and death, and for that I can never repay them or thank them enough.

Anyways, I'll let Ray's words tell the rest of the story: here is his manifesto about his treatment, and the subsequent healing that he has found through this new project, My Sarcoma.

My name is Ray Paul. I am a 50 year old artist, musician, frustrated biologist and myxofibrosarcoma patient at Moffitt Cancer Center in Tampa, FL. I received a BS in Biology from Florida State University in 1986, and a MFA in Painting from the University of Cincinnati in 1991. As of my latest scans in February 2013, I am free of detectable cancer. My next round of scans are scheduled for June 2013.

My journey begins in the spring of 2011, when I noticed a rapidly enlarging lump protruding from my left flank. Unfortunately, I fell into the category of the uninsured who wait and hope for their medical issues to resolve magically. Finally, as the mass grew to the size of an Idaho baking potato, I felt compelled to go into the local Emergency Walk-In Clinic. I was told it was likely a lipoma and I needed to find someone to remove it. After weeks of worry and several inquiries, I approached a surgeon friend who agreed, with some trepidation, to perform a tabletop resection, using local anesthesia. It soon became clear that the mass was more than a lipoma.

I was sewn up and a sample was sent to his pathologist who forwarded it to the pathology team at Moffitt Cancer Center. Soon thereafter, I received "The Call." Shock and confusion rushed in, but curiously, was followed by a sense of calm resolve and numb determination. Fear was thankfully suppressed. By pure, sublime serendipity, my next door neighbor, and friend, happened to be a resident in the Radiation Department at Moffitt. Through him, I have enjoyed a deep well of knowledge, compassion, honesty and inspiration. For that I am eternally grateful.

I was admitted as a patient to Moffitt Cancer Center in August of 2011. I began neoadjuvant radiation therapy in September 2011. Whilst undergoing treatment, I enthusiastically and gratefully took part in a clinical trial: "A Phase II Study Evaluating Neoadjuvant Administration of High Dose Radiation Therapy and Intratumoral Dendritic Cells in Patients with High-Risk Soft Tissue Sarcomas." I am also a part of a research study: "Total Cancer Care Protocol: A Partnership with High Risk and/or Diagnosed Cancer Patients for Life." In October 2011, I underwent a radical resection of the 12 x 12 cm ulcerated high-grade left flank myxofibrosarcoma, along with a right-sided DIEP flap closure of acquired 20 x 17 cm soft tissue defect. In April 2012, I had liposuction and debulking surgery of the flap area (30 x 10 cm). In July 2012 I was diagnosed with a left lung mass. I underwent a lung subsegmentectomy to remove a 0.8 x 0.6 x 0.6 cm metastatic myxofibrosarcoma. During a followup visit, a large mass was detected in my right posterior thigh. In August 2012 I started chemotherapy with pazopanib. In October 2012 I underwent a radical resection of a 13.5 x 10 x 3.5 cm metastatic myxofibrosarcoma. In November 2012 I began adjuvant radiation therapy.

During this life-consuming ordeal I have managed to keep a calm and positive attitude, never becoming too emotionally low or too ecstatically high. I have remained otherwise healthy and have maintained my body weight. I have placed my complete faith and trust in my team at Moffitt, and in my physical and spiritual ability to heal. I am surrounded and supported by friends, family and my steadfast partner, Missie. I made the decision to go public with my battle, posting my progress on Facebook. The outpouring of love and support has been overwhelming and has provided me with a warm blanket of peace and strength. Between surgeries and treatments, I have enjoyed long walks with my beloved Boston Terrier, Blue. He went blind concurrently with my cancer diagnosis. Watching him bravely attack life has been an inspiration and has helped prevent me from descending into self-pity. Music has remained vitally important, and I have managed to write and record. In fact, this whole experience has been strangely life-affirming and fascinating. Never have I dreaded going into Moffitt. The strength and determination of my fellow patients has been humbling and has greatly increased my sense of compassion. It is a great honor to have had the opportunity to interact with my medical team, all members of a profession I so deeply admire. I am proud to have contributed, in my own small way, to the field of medicine and cancer research. I have been inspired to create a painting for the Radiation Department, which hangs in the waiting room 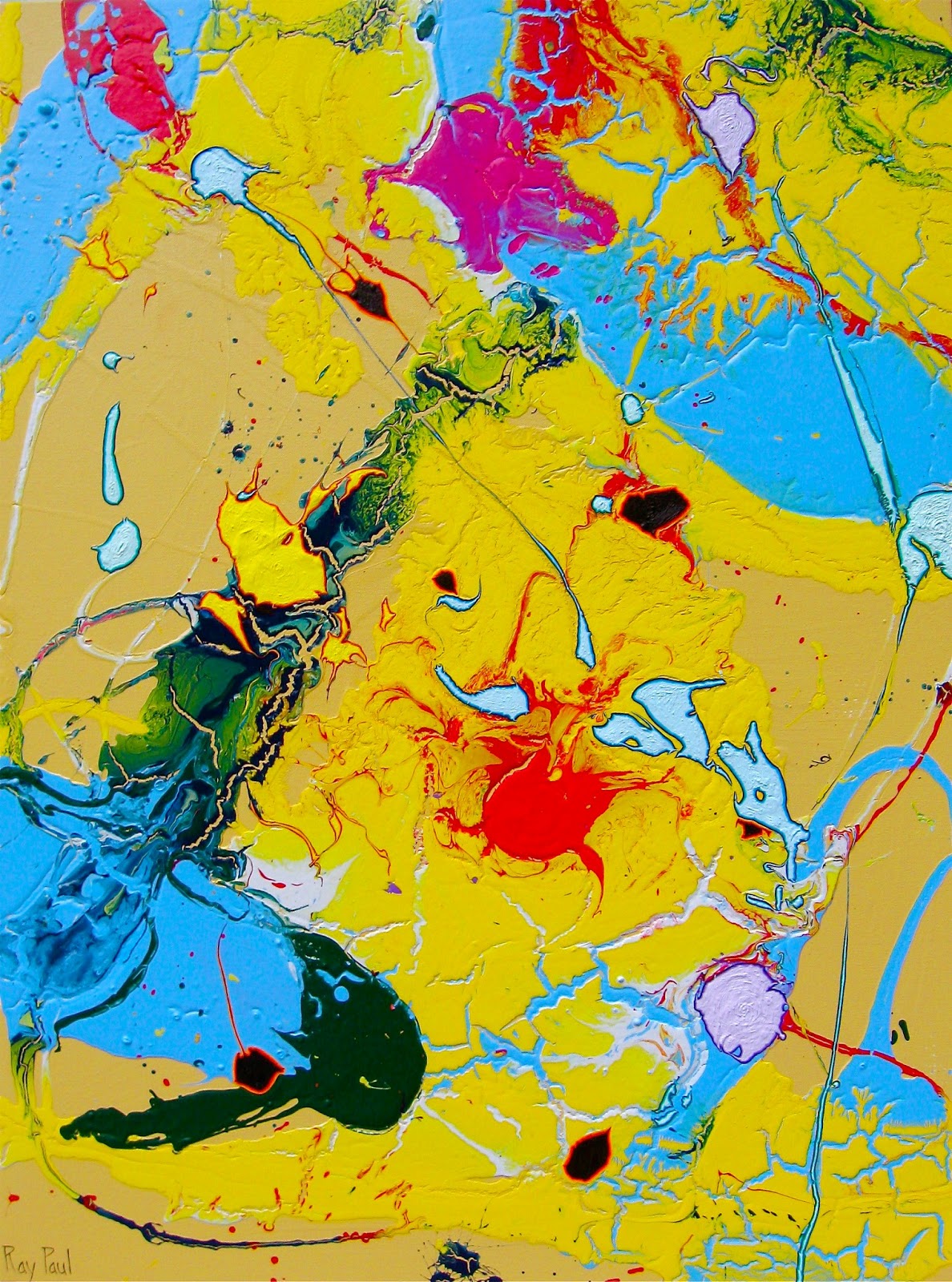 and have donated a piece to the Integrated Mathematical Oncology Department. 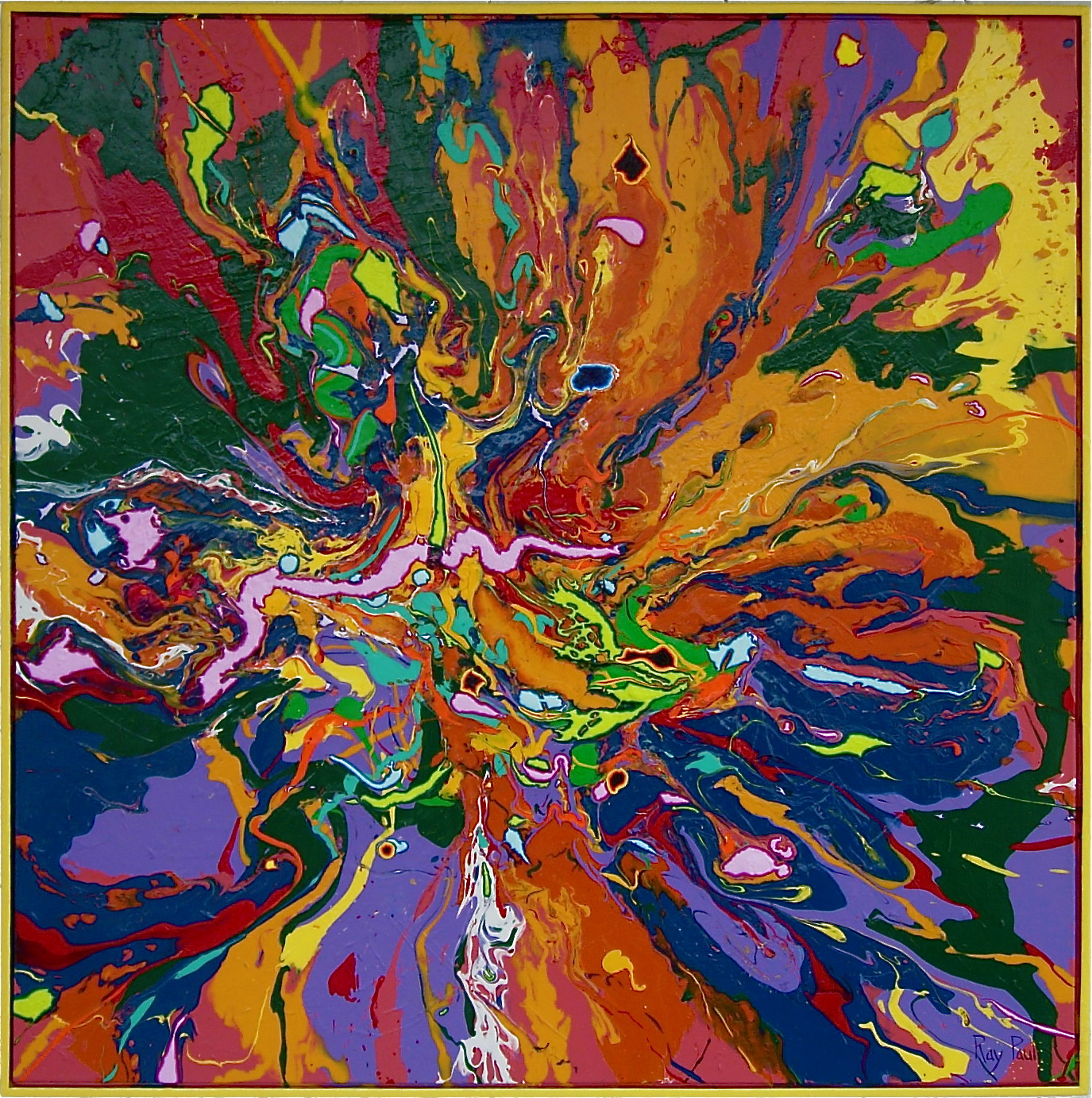 My SAE Fraternity brothers, both past and present, at FSU have joined the cause, and are currently involved in fundraising for the Sarcoma Department. A "SAE Slams Sarcoma" sand volleyball tournament benefitting the Moffitt Cancer Center is planned for April 14 in Tallahassee.

I am currently embarking on a collaborative endeavor entitled "The My Sarcoma Project." I plan on combining painting, photographic images of my tumor cells, printmaking, video and music to create an exhibit that illuminates my experiences as an artist and cancer patient. My pathologist at Moffitt, Dr. Marilyn M. Bui, has graciously provided me with the images. She has stepped out of the shadows of the lab and made me realize that pathologists are an integral part of the team and are vital to patient care. We are also collaborating on a book proposal. She is helping me begin my journey from cancer patient back to artist. All my experiences as a biology student, artist and cancer patient seem to be coalescing in this project. Hazy memories of undergraduate experiments involving plasmid mobilization and bacterial resistance, forms and shapes that have evolved in my paintings over the past 10 years, and the inspiration I have gleaned from my time at Moffitt have all come into focus and have given my work direction and resolution. This revelation has led me to a deep understanding and appreciation of my work. I envision my art to be a prescient, visual manifestation of the battle raging within, and a powerful testament to the beauty of Hope.

As a teaser, here is a prototypical 'My Sarcoma' piece.  You can see his signature style of abstract forms detailed into cellular figures, and beneath, an H&E pathology image of his own tumor. 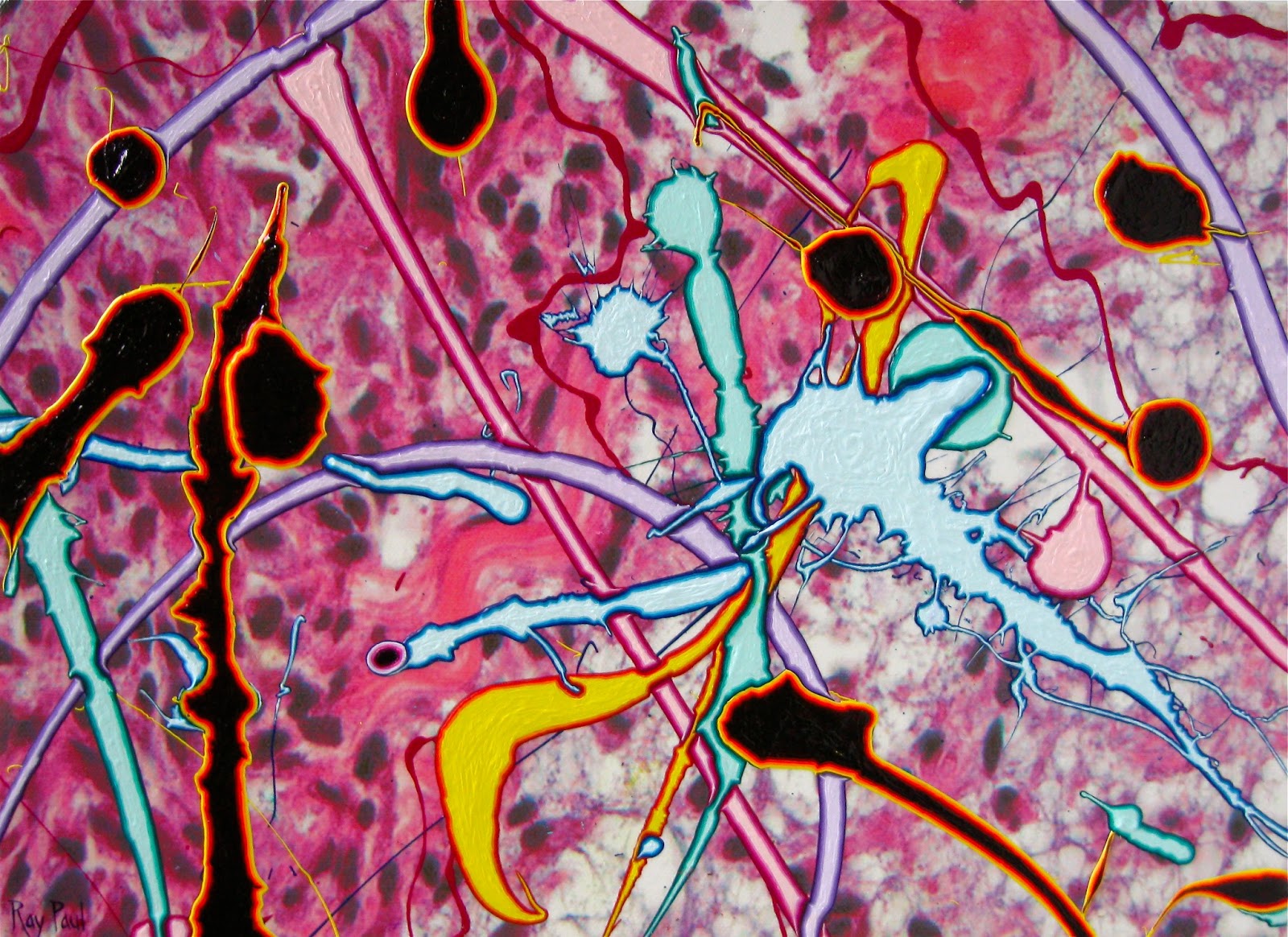 I can't be prouder to be part of Ray's healing journey, but I can also take no credit at all.  I delivered no radiation, removed no tissue, prescribed no medications.  I have been just a friend and guide.

I'll be sure to tweet about My Sarcoma as Ray continues his project, but you could also follow him on Twitter at @raypaul4 for details and music.

This post and Ray's project were highlighted on the TEDMED blog.