One of the benefits to being in my group at Moffitt Cancer Center is that we have three really smart, world renowned thought leaders: +Alexander Anderson, Robert Gatenby and +Robert Gillies.  These three gentlemen are so busy, in fact, that they can't even go to all the amazing events that they are invited to.  Sometimes, when this happens, they are able to suggest a replacement.   I was lucky enough to be in the right place at the right time when Bob Gillies (Bob G_i) was unable to go to Lugano, Switzerland, to attend the World Oncology Forum, and further, lucky enough to be accepted as his replacement.  This is an event that would not have qualified to attend for another 20 years, assuming that I did well for those coming 20 years.  It was hosted by the European School of Oncology (ESO), an organization less well known in America than it should be, but quite influential in Europe and the rest of the world.


The mission of ESO is to contribute to the reduction of death from cancer due to late diagnosis or inadequate treatment, with a focus on education.  On the occasion of their 30th anniversary, they held a conference, the World Oncology Forum, to bring 100 cancer experts and cancer specific journalists (including Clifton Leaf, Science editor at the NYT whose face is just above) together to answer one question: Are we winning the war on cancer?

I was lucky enough to be the pinch hitter for Bob Gillies, and represent Moffitt as one of only 4 partipants from the USA.  Most of the people with whom I was speaking were knights of the realm (one even had his own paradox!), cancer center directors and even ministers of health for entire countries. I was, in a word, outclassed.  That being said, my patron, Bob G_i, made sure I felt emboldened to speak out for our agenda - the use of rigorous theory and evolutionary thinking in cancer research.  And, as luck had it, I ended up at the table next to Marge Foti, the head of the AACR (who, it turns out, is a super nice lady), so I got to talk a bunch (when she finished saying what she wanted, I just grabbed the microphone and kept going!). 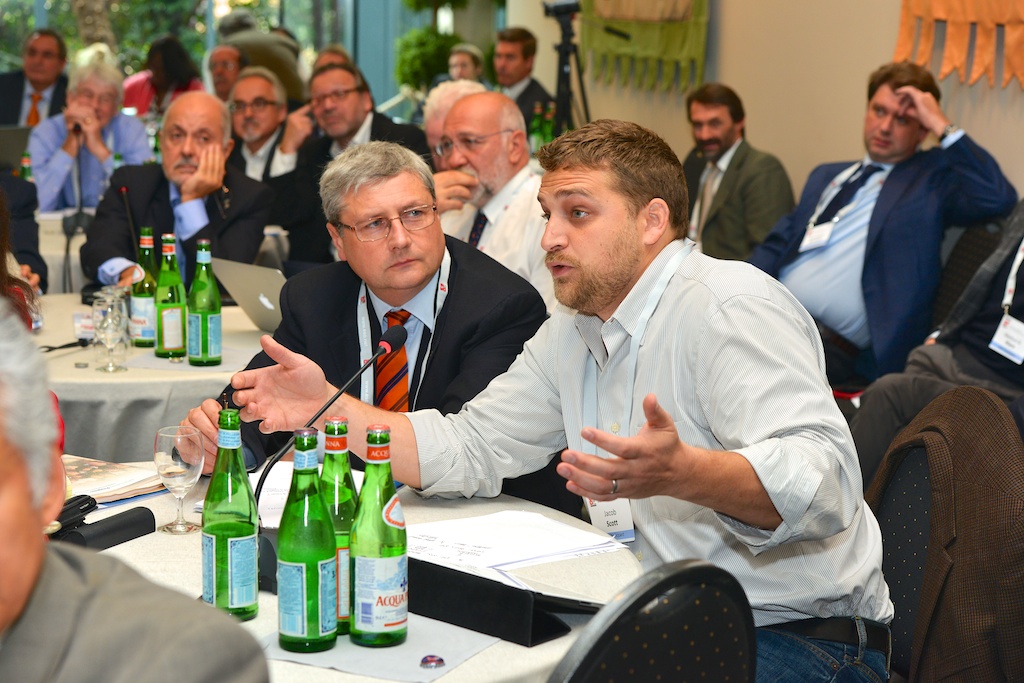 I think my role there was really to be an uninhibited, undogmatized voice unafraid to say 'We don't know'.  Because of my role as a student, and not as someone that entire nations look up to, I am able to say that without breaking trust...  and in cancer, this is a very important thing to say.  We really, honestly, don't. know. &*!@.  Cancer is a disease that keeps outpacing us and our results aren't much better than they were 50 years ago.  We have learned a LOT, but it is not obvious how what we've learned is useful.  Where we have done well is in patient care and in maximizing the effectiveness of the therapies that we do have, but we have a long way to go before we can hope to end this disease (if we can at all...)

My major contention (and one that I managed to get squeeeeezed into the consensus statement) is that there is a MASSIVE theory gap in cancer research.  I would argue that we still don't have a deep understanding of the data generated 30 years ago!  Do we REALLY know the meaning of aneuploidy in cancer (feel free to weight in +Arturo Araujo)?  What about chromosomal aberrations?  How can we possibly hope to make sense of (and utilize) the information coming out of The Cancer Genome Atlas, if we don't understand the first principles?

I honestly fear sometimes that we've been blinded by the promise of easy answers in the genome, and because of this, we have abandoned almost all other forms of research in cancer.  If you don't have genetic analysis of some sort in your project, good luck getting it funded.  But what if the answer isn't in the genome?  Well, that is a topic for a future post...  back to the WOF.

So - what was the answer we came up with?  It was: No.  We aren't winning the war on cancer.

We published a call to arms in a number of newspapers throughout the world on World cancer day, February 4th. (International Herald Tribune, Le Monde, La Repubblica, El País, and Neue Zürcher Zeitung) that looked like this: 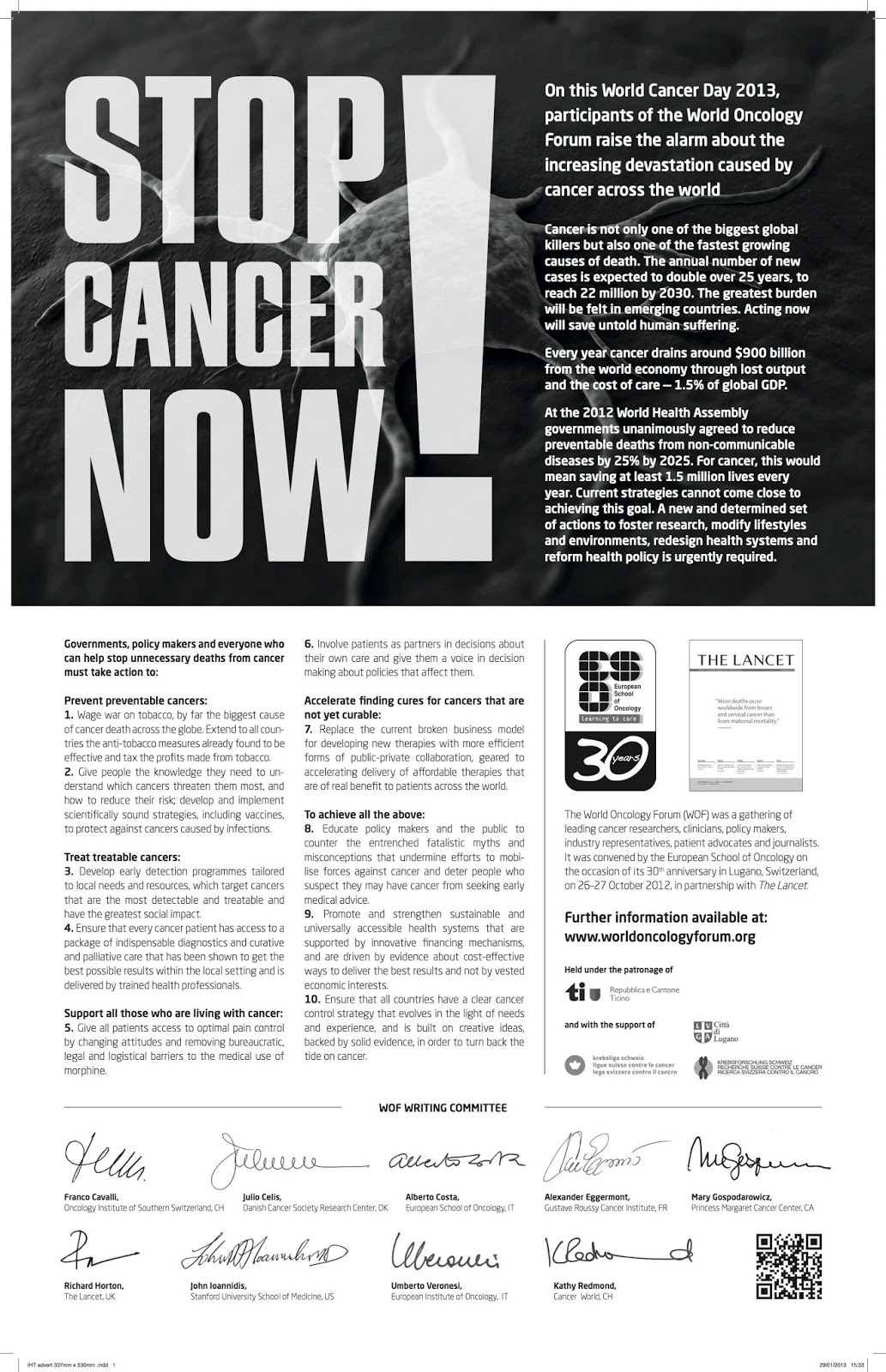 and a piece in the Lancet (which I don't have access to, ARGH why isn't THE LANCET #openaccess??).  And finally, a piece in Cancer World magazine, the ESO's own journal, in which I they put this paragraph, largely about our contention (yes, it was me who wasn't convinced), right after Professor Hanahan's hopeful talk that suggests that all we need to do is target the hallmarks of cancer, and we'll be OK.

Not everyone at the Forum was convinced. Doesn’t hitting targets harder (with all that implies for accompanying toxicity), and hitting multiple targets, sound a bit like a return to the chemotherapy carpet bombing approach? Given the way tumour cells mutate, shouldn’t we expect that if we target and shut down one mutation the cancer will simply find other mutations to exploit to keep going? Before investing billions on drugs targeted at one mutation after another, shouldn’t we start by trying to understand basic principles of cell behaviour, so we can anticipate the cancer cells’ evasive strategies, and devise rational counterstrategies, based on rigorous mathematical models, to cut off their options?

So I managed to at least get the words 'mathematical modeling' and 'rigorous theory' into the minds of the world's cancer leaders...

I also came away with a deeper understanding about the worldwide cancer situation: that really, my theories on metastasis, cancer stem cells, or the evolution of resistance to targeted therapy, while exciting to me, mean very little to the tens of thousands of people without access to a properly trained surgeon, ANY radiation therapy or even pain medication.  Humbling.  But, we do what we can.

Thanks to Anna Wagstaff for listening to me when she had MANY more influential people eager to get their two cents in.  Also, thanks for featuring me in their magazine, where I think I managed to piss of a few old teachers and maybe even some prospective bosses with my final answer in their 'My World' feature.

It was an amazing meeting run by passionate people.  If you ever have a chance to interact with the ESO, take the opportunity.  The USA could do with an organization like it.