A visitor, the resulting hackathon, and a nice result.

So, I was sitting in a pub in Oxford (the head of the River - gorgeous place and one that Lewis frequents), and I met this guy +Artem Kaznatcheev. No, he wasn't having a pint at the table next to me. No, he wasn't there for an academic visit.  I met him on twitter, because of a tweet from +Steven Strogatz about mathematics in biology.  Here's how it all began: 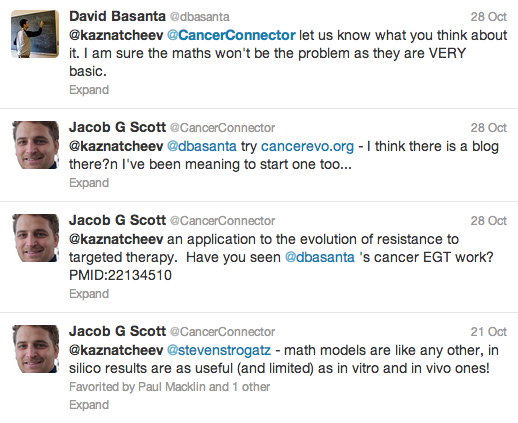 In there, we can also see the first thoughts about making this blog - about 6 months before I actually did it. Better late than never?

Anyways, +Artem Kaznatcheev and +David Basanta and I (and some others) started what is now a 10 month long conversation, mostly on Google+, in a community Artem started and we co-moderate, called Evolutionary Game Theory.  This conversation has covered topics (subsequently blogged about) ranging from understanding vs. predicting (followed up nicely by +Philip Gerlee in his blog here), games bacteria play (and a recent +Jeff Gore paper in PLoS Biology), connectors in science and, more recently, the topic of our original connection: the use of game theory in cancer.

The conversations have been lots of fun, we all think a bit differently, but have many of the same ideals about science, understanding and the uses of mathematics.  Further, we are all hopeless nerds and *cough* workaholics.  So, when Artem noticed that the conference he was going to (Swarmfest 2013) was near us, he jumped at the chance to come meet us and get some work done.  On his way down, he gave a couple of David's papers a detailed read through to get the lay of the land (and blogged about it - clever way to annotate things for yourself as well as manage a post).

So, here's the hackathon part.  Artem arrived Wednesday night and he and David worked into the wee hours.  He then came in to #IMO and they spent the day doing a full analytic treatment of a game David and I published in the British Journal of Cancer.  They then worked again into the wee hours at David's house.  I arrived from an out of town trip the next day (Friday).  Artem came in to IMO and gave a talk (which we managed to broadcast on G+, something we hope to continue, but with better sound quality, any ideas on a bluetooth mic?).

After his talk, we spent the afternoon identifying a tight question: in a growing tomour, what would change in a simple game or proliferative vs. motile cells between the middle and the edge, if anything?

One of the difficulties in EGT is that neighborhoods and population structure is not considered, indeed, it is assumed that the population is inviscid (well mixed).  A great paper from Martin Nowak at Harvard gave us a way to think about effective neighborhood sizes (formally, how to understand changing game dynamics on graphs of differing, but regular, degree).  This has some obvious applications to growing tumours - when they hit a basement membrane or an organ capsule they go from growing in 'free 3-d space' (neighbors on all sides) to growing almost in 2-d, against a wall (with neighbors only on one 'side').

So, we spent the rest of friday afternoon doing some analysis 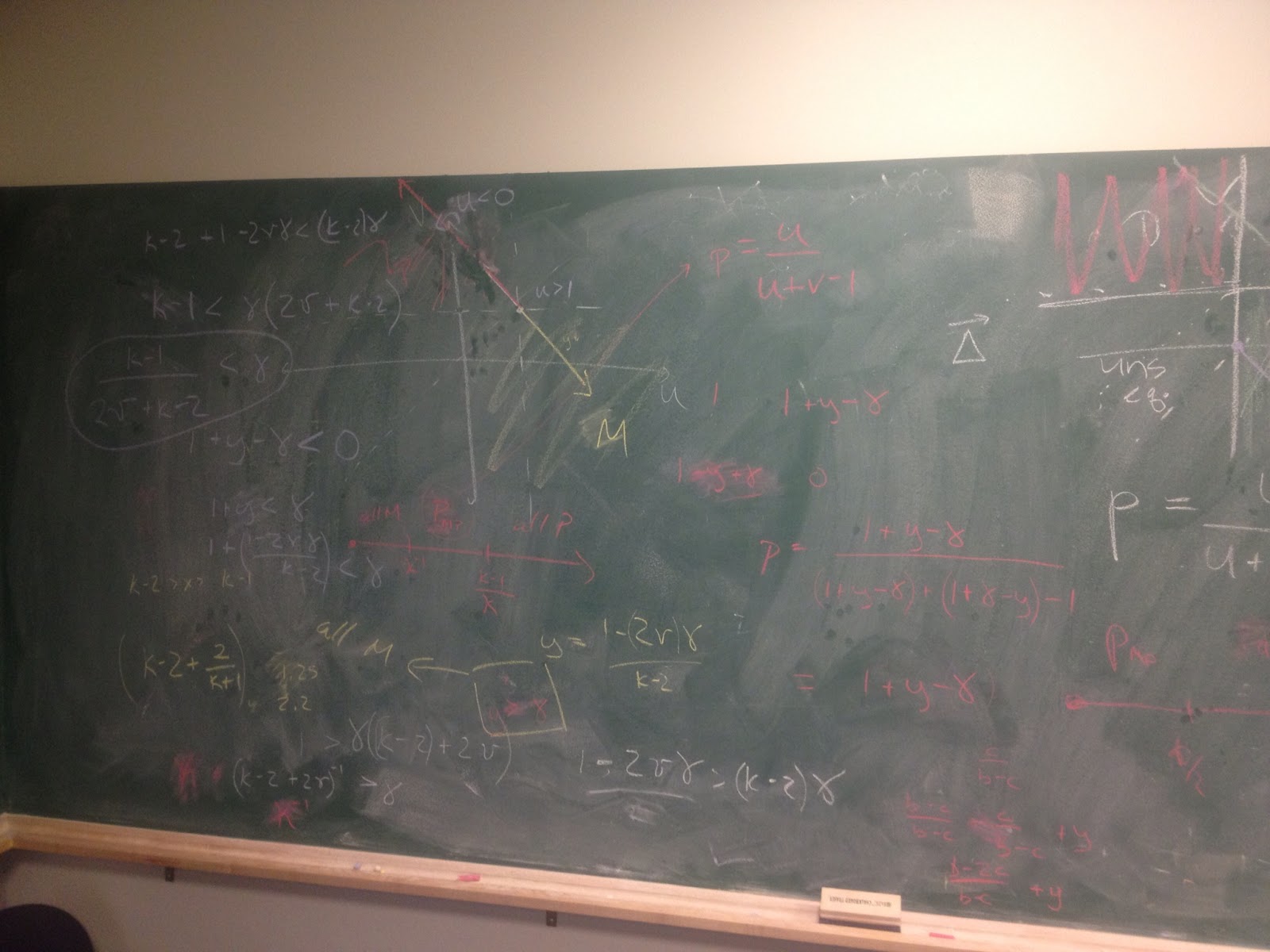 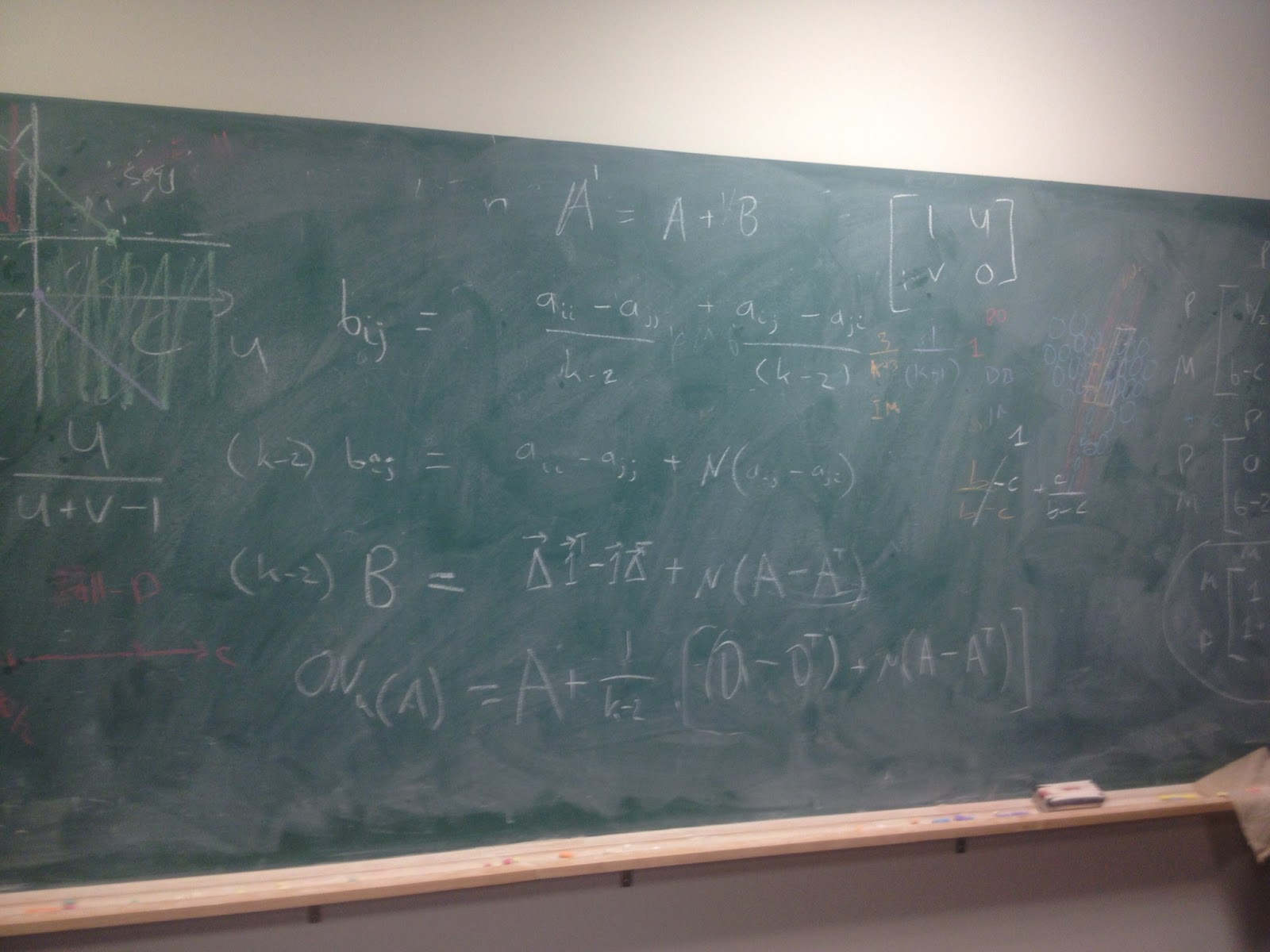 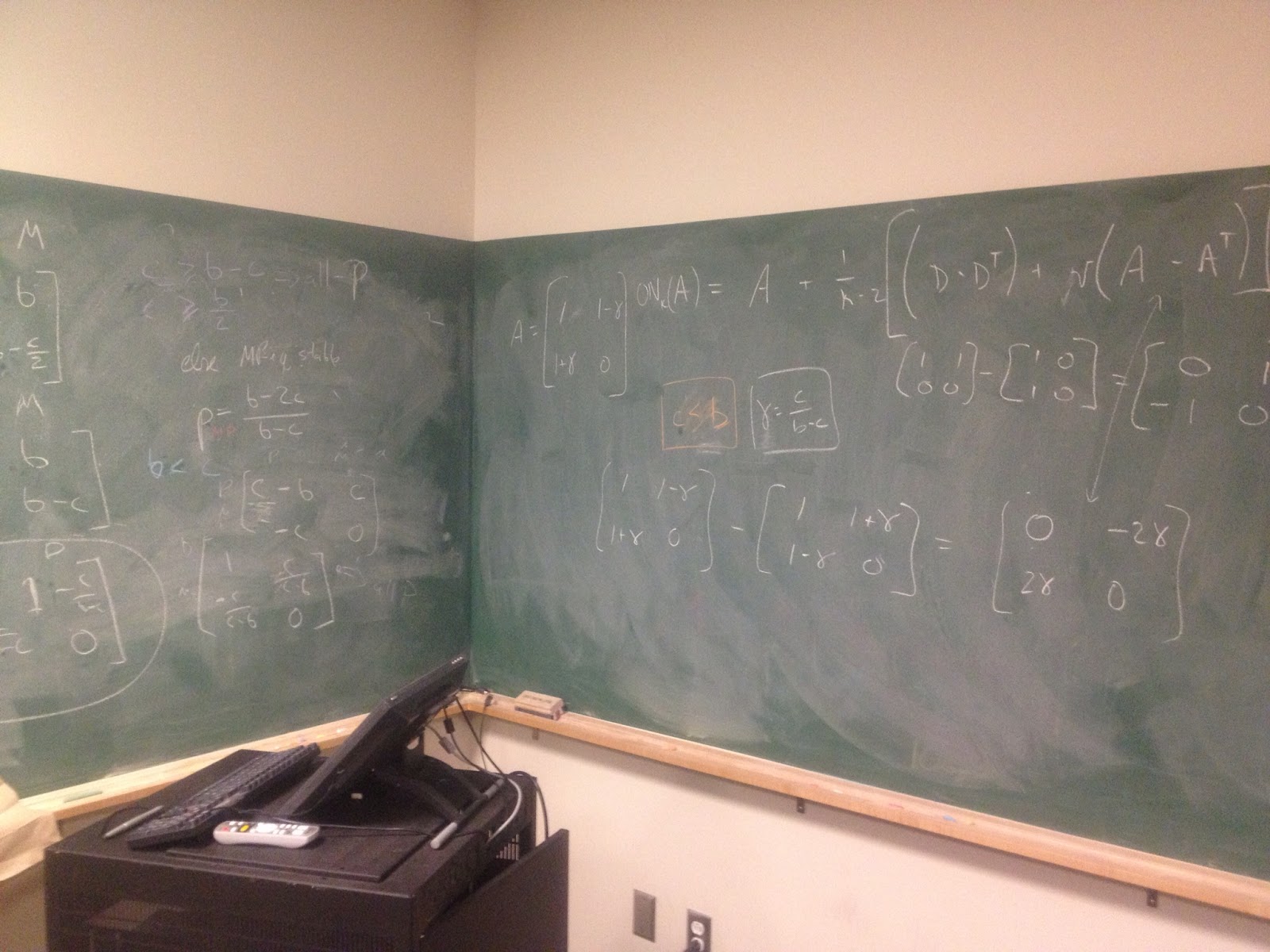 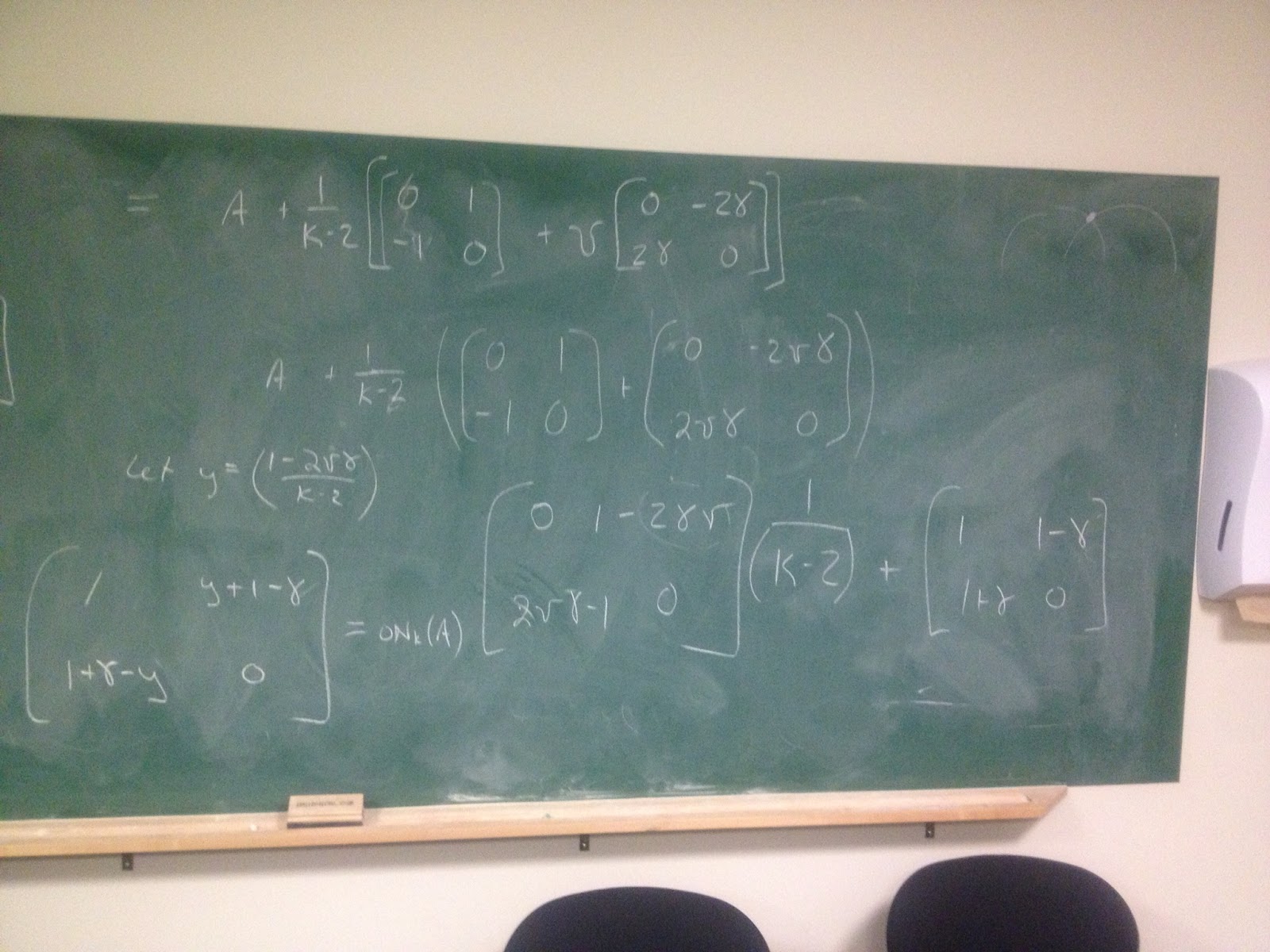 Then, on Friday night, we celebrated by buying a bunch of redbulls and working 'till 2am at my house.  I dropped him off at his hotel, then picked him up for a late breakfast and we worked, using this great new on-line app we found +writeLaTeX (which is AWESOME) and started a manuscript.  At dinner time, we broke company...  Then, Saturday night, we really blew off some steam - and made the figures for the paper.  Dropped off at his hotel around 2am, he was picked up by David the next morning and they worked until his plane left.

So, that was the hackathon.  The result, we are proud to announce, is a paper, done and dusted, beginning to end, in 15 days, with the lion's share of the work done in the first 4 days (about 48 hours of which saw the three of us working full on).  To be fair, we thought hard about the question in conversations for several months, and the groundwork had been laid by previous papers, but really, this felt like doing theory the way you're meant to.  It felt inspired.  And, I think, this is the best paper I've been a part of so far.  But, don't take my word for it, check out the preprint, just released on the arXiv today:

We also have submitted it, and it is now under consideration at the Proceedings of the Royal Society, Series B.  While we were motivated by a cancer scenario, we feel the result applies more broadly to biology than many of our previous papers, and so have targeted a broader biological journal.  And, PRS B does publish theory, and has recently published some interesting work from +Arne Traulsen's group at Max Planck on evolution in structured populations, so it seemed like we have a chance...  we'll see.

After this experience, we hope to weave hackathons like this into our schedule more often.  It certainly isn't something I (or my family) could tolerate every week, but it was fun and highly productive and we'll try to do it again soon.

Anyways, we'd love feedback on the paper.  Artem has a more technical post today about the work and some future directions which you can read here.
Posted by Jacob Scott at 6:45 AM