About a year and a half ago, after my talk at TEDMED 2012, I got a call from a medical oncologist asking if I would come to visit a summer camp in the desert of New Mexico that featured a bunch of really smart kids and astrophysics. This sounded right up my alley (I love nerds, and I love stars), but the trip from Oxford to New Mexico seemed a little bit...  far.  So, I said I was interested, but maybe we could talk next year, when I was back in Tampa in IMO - which I promptly forgot about.  Thankfully, they didn't forget, and a year later, I got the call again.  So I packed up and headed for the Summer Science Program's, Socorro, New Mexico campus (on the campus of New Mexico tech, home of the Miners and well known for excellent work on explosives!).

As I left the rental car place in the Albuquerque airport, I asked the attendant how to get to 25 South and he said:

"You mean 25 North, there isn't anything to the south"

Which is how I knew it was the right direction... 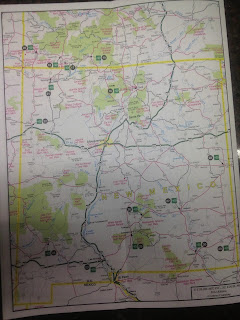 After arriving, I was met at my hotel by the site director, Barb, and I asked to go up to the telescope to see the kids doing their observations.  This camp is set up in a really cool way, they spend 6 hours a day in the classroom doing intensive math/physics and computer science (Python) coursework.  They are split into teams of three, and at the very beginning they choose a near earth asteroid (the way they choose the asteroids is kind of a funny story, but maybe one of the students will comment with how that works...).  The teams then get a certain amount of telescope time, during which they take measurements of their asteroid's position.  They are then expected to do the math and write up some code to predict the orbit - which they then share with some astrophysicists at Harvard.  Really cool - not just taking courses and playing with telescopes, but DOING MEANINGFUL SCIENCE. Needless to say, I didn't fly all the way to NM to just give a talk, so at around midnight, I wandered up to the observatory.  It was DARK (perfect) and Barb got out a flashlight, which I asked her to extinguish so I could enjoy the darkness...  she demurred suggesting that we needed it to see any snakes in the path.

She ran away, and I snapped this pic - can anyone ID it?  Not the best pic - iPhone flash sucks...  its head was narrow, like a non-venomous snake, but I don't know my high desert fauna...  little help? 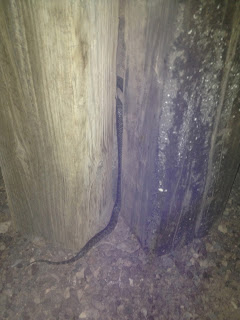 We finally got to the telescope and found the group observing. 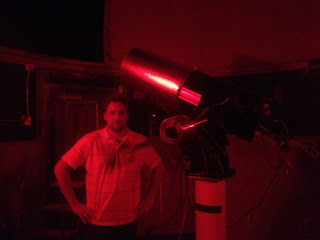 They weren't able to see their asteroid this night, but they showed me a beautiful globular cluster (pictured) and a spiral galaxy that they found.  How cool. 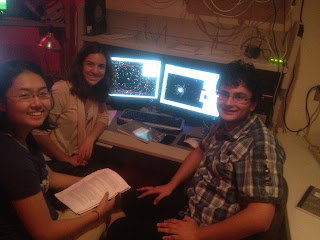 The TA who was there gave me a short tour and I found out that he is starting his DPhil in Oxford next year, at Summerville college (right next to the CMB, my home!) doing condensed matter physics.  Small world.

I finally crashed and awoke to take a short run and saw this really cool 'M' in the hills.  This delighted my daughter (Maren - of course the 'M' was for Maren!) who thought of the Thomas the tank engine episode about the Man in the hills.  It turns out it is for the NM tech Miners, but I like the M in the hills better. 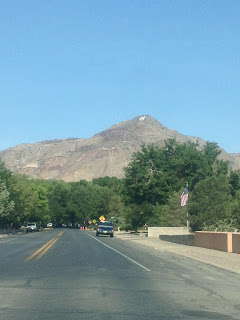 Anyways, after my run, I went up to the campus and set up to give my talk,.which you can see here:

Beyond an introduction into the uses of mathematics in cancer research (and theoretical biology in general) I focused on the need for taking risks in science, and how we ought not shy away from creative thinking.  Further, I talked a bit about my tortuous career path and how having done a ton of different things, and not just following a straight arrow course, had informed my science and my life in general. After the talk, they gave me a sweet green SSP engraved laser pointer (THANKS!) and I had lunch with the students and a chat afterwards...  it was at this point that I started ranting about open access science (I was overtired) and tried to convince them to put the findings from their summer research onto the arXiv (might need an endorsement for astrophysics...anyone willing to help?) and their asteroid tracking code onto github.  Why not!? 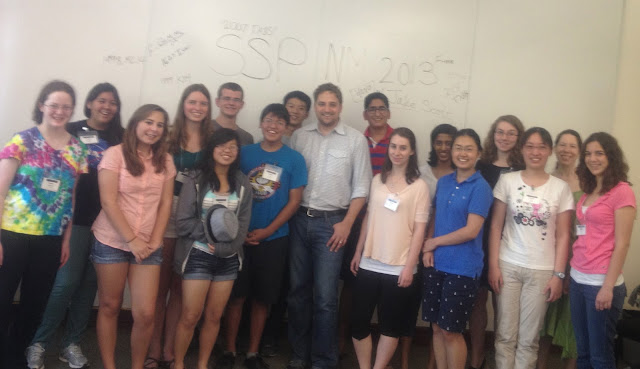 Here's the pic.  I was overjoyed to see a large cadre of girls at the camp - a good sign for our future!  I am certainly going to keep this place, a well-kept secret, in mind for when my kiddos are in high school.  I just wish I had had an opportunity like this - and I'm amazed that I had never heard of it.  My high school teacher - Bob Shurtz (LEGEND) - is the coach of the US Physics Olympiad team and is well plugged in in these matters, but had never heard of this camp.  Considering it has been around since Sputnik, this surprised me.  Further, there were kids from all over the world - India, Hungary and China in addition to the US.  Oh well.  In my next lifetime...

Also worth checking out - the students at SSP have a blog.  Good stuff.  Watch these kids - they are a bright crew.  And, with any luck, I interested one of two of them in theoretical biology!

Great experience as a lecturer, looks amazing as a student.  Spread the word.
Posted by Jacob Scott at 8:49 AM