The role of mathematics in oncology - a discussion

A few weeks ago, my friend and colleague +Philip Gerlee wrote a post on his blog with about the role of mathematics in oncology in which he generally suggested that our role, to date, as mathematical/theoretical oncologists has been to help see old data in new ways.  In the post he said further that there has yet to be a 'seminal paper' in the field that has changed the way that biologists (or clinicians) think about a problem or disease. In an addition to the post, at the suggestion of another friend and colleague, +Heiko Enderling, Philip added an errata, which suggested that maybe he was wrong, and that maybe an early paper on chronic myelogenous leukemia (which you can find our more about here) represented the 'seminal paper' that we needed. 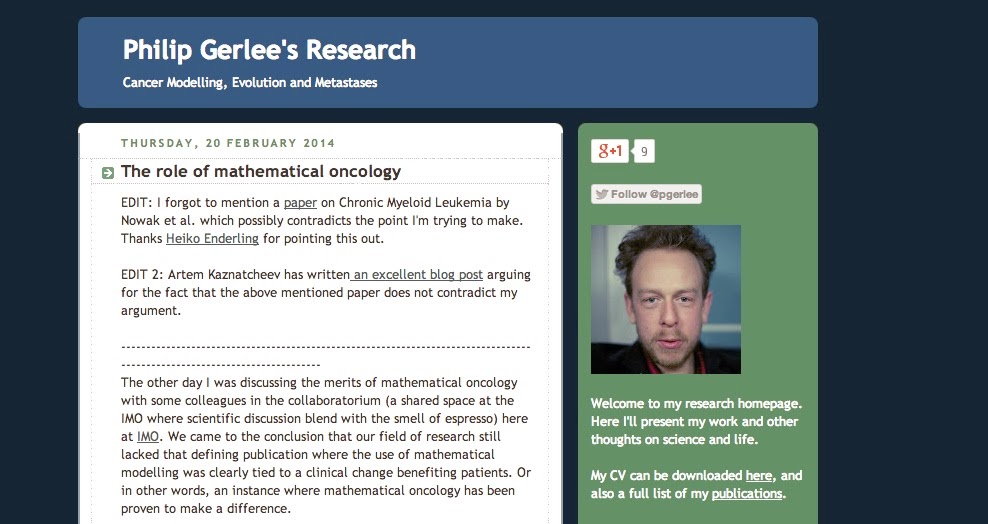 I commented that, while I thought that paper added valuable insight to the field, that it hadn't really changed the way we think of (or treat) the disease. This comment kick-started a much more cogent, and thorough, blog post from +Artem Kaznatcheev

which was re-blogged and further discussed by +David Basanta on his blog, cancerevo.

I think that this debate is an important one.  As our field, mathematical oncology, is still young, defining our role is extremely important, especially for the new generation, as only by understanding our role can we measure our success and plan for the future. While I'm working as hard as I can to finish my DPhil at the Wolfson Centre for Mathematical Biology, I'm excited to think about trying to build a group centered around meeting these goals. Other fields of mathematical biology have better established roles (take for example, developmental biology in which many important advances have been made by theorists, like our own +Ruth Baker and her mathematical model of the clock and wavefront model, for instance), and I fear we'll lose promising theorists to this field (I'm talking to you +Alex Fletcher) if we don't better define our role.

So, take a look at the discussions and posts I've linked above, have a read and think, and chime in.
Posted by Jacob Scott at 8:39 AM