An Evolutionary Game to study the cancer stem cell hierarchy

So, I'm going to take a page out of my friend and colleague +Artem Kaznatcheev 's playbook and write a blog post about a project that I'm nearing the start of.  My DPhil thesis is centered around the study of the 'cancer stem cell' hypothesis, and how it affects tumour progression. You might remember a post earlier about an agent based model we've built to study this, and they'll be more in the future, covering other aspects such as radiobiologic response and niche evolution.  The first paper should be out soon in PLoS Computational Biology, and in the mean time there is a #preprint on the #bioRxiv here.

I've been slamming my head against the wall for the past several weeks working to write up the model in the form of a thesis chapter, which I'm finding is VERY different than writing a paper (at least for Oxford's Centre for Mathematical Biology).  So, as I can't stand it any more, I'm going to write this post about what I'm planning to be the final research chapter in my thesis - an exploration of plasticity in the cancer stem-cell phenotype using Evolutionary Game Theory (EGT).  EGT is a technique that has been used for half a century or so to study the evolutionary dynamics of populations containing species (or players) with different life-strategies (called payoffs).  It differs from standard Game Theory in that players can't change strategies, but instead, their frequency in the population will change based on the relative fitness as governed by the replicator equation.

We have used this technique in the past to study a few scenarios in cancer - specifically: +David Basanta and +Alexander Anderson and some collaborators from Vanderbilt studied the effect of therapy on prostate cancers made up of populations of cells independent and dependent on the stroma, which you can read here; and then we studied the role of IDH1 mutated glioma cells in glioblastoma with +Russ Rockne and +Kristin Swanson.  More recently, +David Basanta and +Artem Kaznatcheev and I studied what happens at the edge of a tumour using a method developed by Ohtsuki and Nowak which Artem has blogged about a fair bit to try to get around the limiting assumption that is typical of evolutionary games of the population being well-mixed (recently updated preprint).

Phew - that was a long introduction. Anyways, I'm eager to do some EGT in my thesis, and no one has tried to make sense of cancer stem-cell plasticity with this technique, so I figure I'll give it a go. We're interested in what sort of conditions would result in promotion of the stem phenotype, why the stem fraction would be heterogeneous and how different sorts of stem-cell niches would affect this fraction. These are good kinds of questions to ask using EGT as the end result is (typically) ranges in parameter space that map to certain population proportions in the long run (called the Evolutionary Stable State which you can read about here).

So - what's the game then?  Well, we've thought long and hard about how to structure this sort of game. We've gone back and forth thinking about pitting one stem cell against another, different types of tumours (with different stem parameters) against one another, but have recently settled on trying to pit the stem cells vs. plastic daughters vs. non-plastic daughters.  We're going to consider some intriguing data from our collaborator +Anita Hjelmeland about the role of IL-6 in promoting the stem phenotype and try to make some sense of all of this!  We begin by thinking about the allowable phenotypic transitions and population changes as stem cells either self-renew (probability s) or divide asymmetrically to form a non-stem daughter and maintain their population number.  The plastic progenitors can also self-renew (probability a) or differentiate (d) or dedifferentiate back into stem cells (1-a-d). You can see a schematic of this in the figure below: 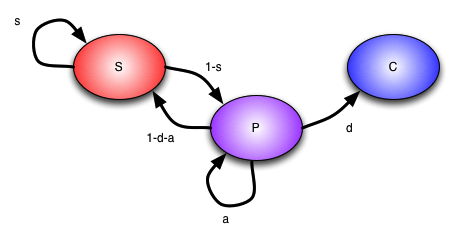 We decided to move away from the standard formulations of EGT in this respect, and we consider these sorts of divisions (ones that increase or decrease a population) as being fitness payoffs. And, as I said we'd try to consider the effects of IL-6 which +Anita Hjelmeland and crew wrote about, we've added in an asymmetric cost (c) and benefit (b). In their paper, they found that both stem and non-stem cells produced IL-6, but that only stem cells benefitted from its presence.  So, our final payoff table looks something like this: 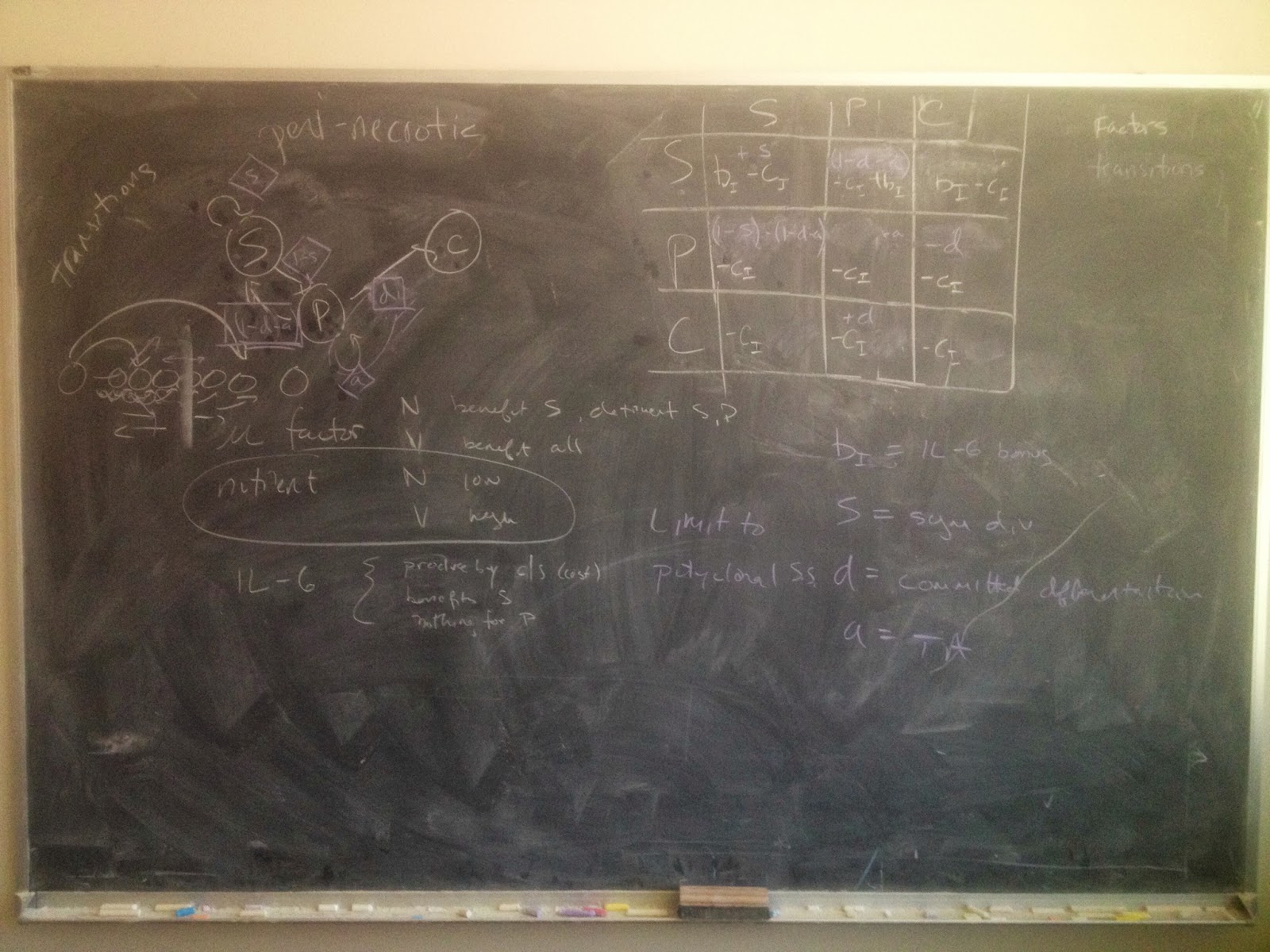 hmm... you can't really read that - but I can't NOT include a picture of the chalk board, so there it is. Here's the payoff table we think we're going to go with.  Now listen, if you are an EGT nerd (I'm talking AT LEAST to you +Artem Kaznatcheev - PLEASE DO NOT ANALYZE THIS GAME, or if you do, keep it to yourself, I need a DPhil!).


So - that's where I'm going to start.  With any luck we can learn something.  Worst case, I'll be able to make some pretty pictures and do some proper analysis.  Next post will be an analysis of the three 2x2 subgames, a la Artem's method (analyze, blog, analyze, blog, PAPER!).

More soon.  If you have feedback on the payoff table, I'd LOVE to hear it (BEFORE I start analyzing it).