+Andriy Marusyk and I have a medical student rotating through our collaborative lab for the next couple of months, here's an intro with a couple figures from a recent grant of mine. 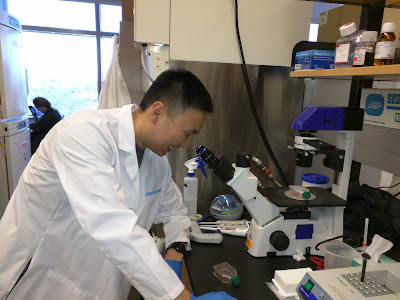 Hello,
As an aspiring radiation oncologist, what originally drew me to the field is its investment in scientific research. My name is Jeffrey Peacock, and I am a visiting 4th year student from UCF who is working in Jake’s lab for the first 2 months of 2016. I am excited to work on some really cool projects that Jake has started. I have spent a few years in a wetlab, both during undergrad and before and during medical school, performing genetic engineering on bacteria and yeast to produce commodity chemicals. One experiment that I designed was a directed evolution study to increase turnover of a bottlenecked enzyme in a metabolic pathway. I have always been fascinated with using mother nature to our advantage in the laboratory, especially when curing cancer is the goal.  When I heard a talk given by Jake at Moffitt during an away rotation for radiation oncology in mid-2015, I knew he was doing some really exciting work that I was interested in doing and that was tangentially similar to work I had done in the past. We spoke briefly after his talk and threw around the idea of me returning during January and February to work in his lab. After meeting with Jake a few times, everything fell into place, and I am on board to start doing research with Jake for the next 2 months. 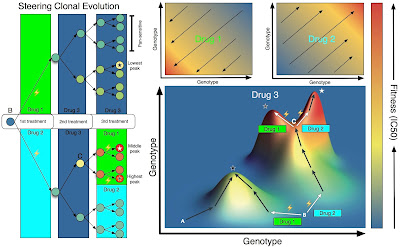 Although 2 months is not a long time to spend in a wetlab, I am excited to begin a handful of projects that will hopefully produce impactful data. Jake was the first to introduce me to the concept of mapping evolutionary landscapes. A paper published in Science in 2006 showed that there exist certain pathways that populations take in order to evolve to handle a selective pressure (see http://www.ncbi.nlm.nih.gov/pubmed/16601193). Once these landscapes are mapped, they can be used to steer populations along certains paths, such as a path that leads cancer cells to be sensitive to a drug (see Figure 1). In order to begin creating these maps, cancer cell lines need to be evolved to gain resistance to various drugs. My active role in this project will be performing radiation sensitivity and genetic assays on these cancer cell lines at different time points during their evolution against various chemotherapy drugs (see Figure 4). The idea is to gain insight into temporal changes cancer cells experience when exposed to chemotherapy drugs and to determine if there are key time points when synergism between chemo and radiation are at its best and its worst.

The next project involves engineering non small cell lung cancer strains with common mutations that confer resistance to chemotherapy drugs to measure evolutionary landscape. Rather than relying on mother nature to create these mutations, I will be utilizing CRISPR/cas9 to perform common genomic edits on non small cell lung cancer strains to create resistance. These cell lines will then be used to infer evolutionary landscapes developed in prior evolutionary experiments and to create mathematical models to predict chemotherapy regimens that minimize resistance.
I remember being asked during my interviews for medical school the question of where I see myself in 5 years. I would answer that I imagined myself as a clinician who is actively involved in research. At the time, I did not know what type of clinician I wanted to be or what role I would play in research, but I knew that both aspects of medicine were necessary to satisfy my insatiable curiosity and my desire to help people directly. I can honestly say as I approach that 5 year mark that I am beginning to see my vision become a reality, and this beautiful marriage between scientist and clinician is more perfect than I could have ever hoped.