If you've been reading along since the beginning, you'll know that I'm a huge #openaccess fan, and, really, am something of an oversharer. When I began my scientific career, I was posting all of my work on the qBio section of the arXiv. Me and some colleagues responded to the increase in utilisation of #preprint servers by making Warburg's Lens, a blog inspired by Haldane's Sieve to help aggregate mathematical oncology pre-prints, and allow for discussion. We've had a ton of success with Warburg's Lens, and it has been helpful for many folks. One of the nice aspects of it, that the arXiv didn't have, was the ability to comment, and to link in to social media in general.

A couple years ago, Richard Sever contacted me about an upcoming project, the bioRxiv, and asked me to be an affiliate - which I eagerly accepted. It seemed the perfect way to help convince my more open minded biological colleagues - something to which there are still quite a few (unsubstantiated) barriers.

This past summer, at the annual Society for Mathematical Biology Meeting, I gave a talk on pre-print servers and social media in science. While I was preparing for the talk, I ran across a great infographic about the arXiv and was blown away how LITTLE qBio there actually is... (something like 1.6% - TONS MORE info here)

Anyways, I recently asked Richard if there were any stats on publications/utilization of the bioRxiv. At the time, there were no stats done, but today I saw on this twitter: 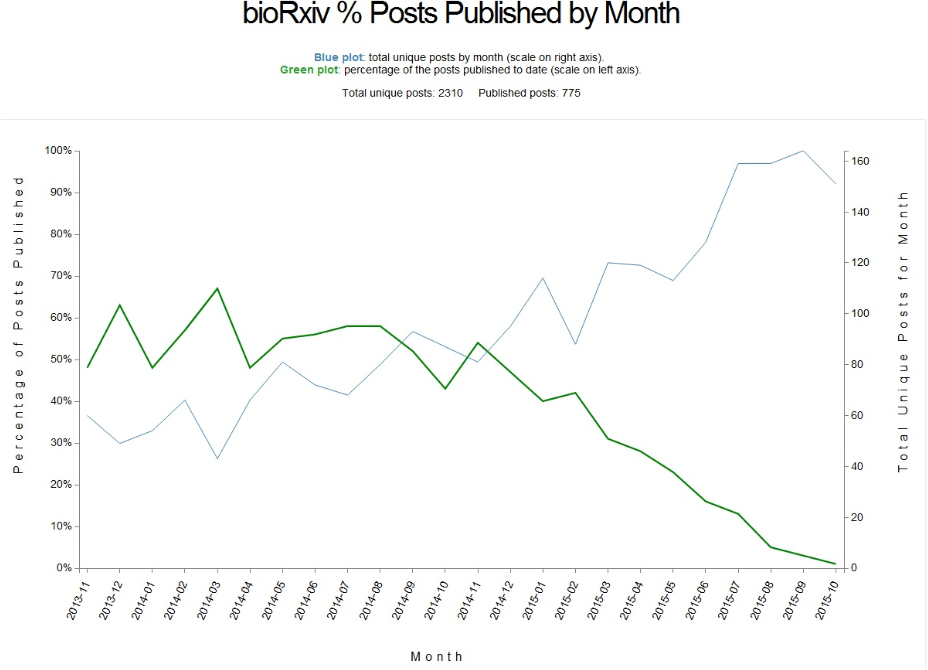 Within just a year, more than half have been published!  Good news. I'm hoping that my newest preprint (which is also on Warburgs Lens here) joins the majority ASAP :)

Anyways, I'm heartened to see the increase in utilisation.  I have to say, having submitted I think 6 manuscripts to the bioRxiv, and around the same number to the arXiv, the process at the bioRxiv is MUCH easier. It can be done in minutes, rather than fighting with the LaTeX compiler on the arXiv istelf. My current practice is to send everything to the bioRxiv, though I still read and monitor the qBio section of the arXiv... what are your practices?