New publication, just in time for the new year: A tale of two papers and two new friends.

About a month before I left Moffitt, in June of 2016, I got a twitter direct message from Steven Strogatz that said he had read one of my earlier posts on evolutionary graph theory and he mentioned there might be some fun to be had with the more 'math-y' aspects of the problem.

This led to a long series of fun phone calls and discussions about how network connected structures related to the biology of cancer (and even infections within hosts). One of Steven's students at Cornell, Bertrand, grabbed ahold of the idea and ran some initial simulations of a few of our ideas and found a striking result: that the fixation time for a simple Moran process on a large number of known graph structures followed, almost perfectly, a simple log-normal distribution.


This finding struck us as something worth chasing down a bit more. What we found ended up opening up several really fun cans of worms, and began an interesting and fruitful collaboration.
I ended up making the move to Cleveland Clinic, and in the mean time Bertrand and Steven continued to chew on this problem and we published the first paper of the collaboration Takeover times for a simple model of network infection, in Physical Review E. It was in this paper where we first realized that the distributions we were observing were not, in fact, log normal, but instead were a kind of extreme value distribution called a Gumbel distribution, which has been known to masquerade as log-normal. 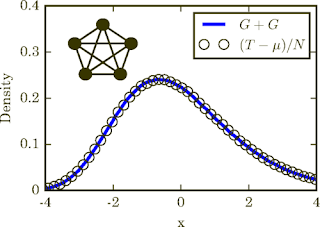 We kept chewing on the problem, and I went to visit Cornell and took a long walk with Bertrand and Steven and Murray (the Strogatz family dog) and even more lightbulbs went off concerning a quite technical, but important detail of the models of evolutionary dynamics - in particular, the choice of the order of update (Birth or Death first) and how fitness biases are implemented (whether you choose which node to replace based on fitness, or how probable it is for a given node to divide). 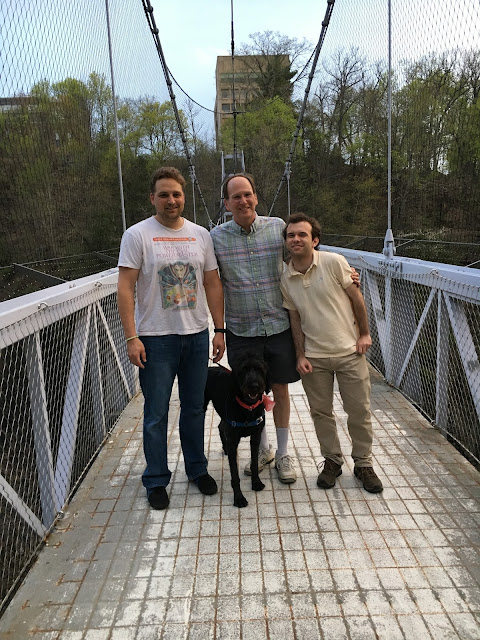 I gave a short talk the next day, which was live streamed and can be seen here on Cornell's Applied Math colloquium page.  Overall it was a super nice visit, and we were able, I think, to solidify some of our thinking on this issue, which we dutifully scribbled on a napkin: 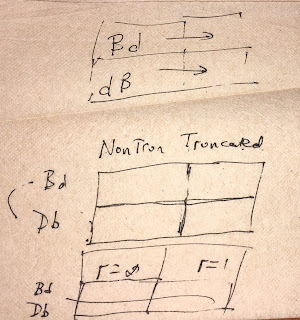 This led to some further thinking, and then Bertrand opened another kettle of fish when he found a series of papers that discussed 'Sartwell's Law' - which was a phenomenological law describing the 'log-normal' distribution of incubations times (within host) for a long list of diseases, including cancers. While this has been observed for over 100 years, there had yet to be any real work done describing WHY, and it seemed that our model formulation, and results to date, could help explain this. In fact, replotting some old data made for a nice figure one... 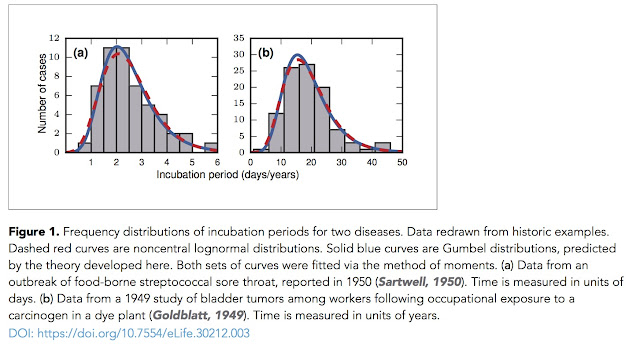 and if you want to know WHY??  you'll have to go read the paper that just came out: Evolutionary dynamics of incubation periods in eLife (aside: the review and publication experience was really stellar - 5 stars). 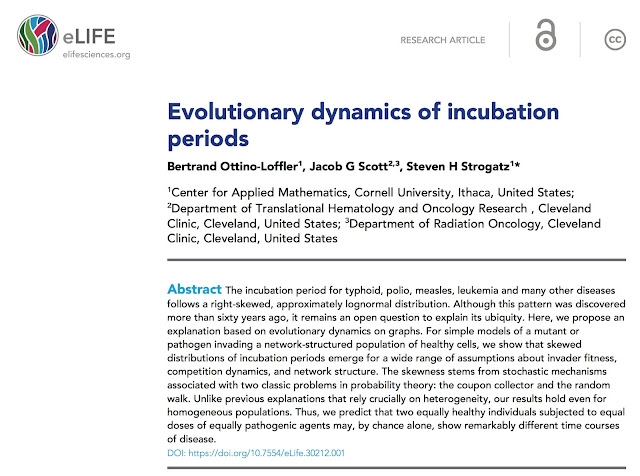 I'm looking forward to what comes next. I think this work has opened up a few doors for folks to go through in probability and network theory for maths folks, possibly in condensed matter/percolation theory for the more physics-y crowd and maybe even in biology and epidemiology. Only time will tell.